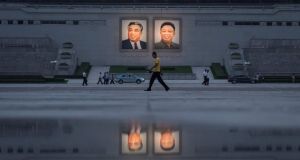 China has described the latest round of United Nations sanctions on North Korea over its nuclear programme as important and the “right response”, but foreign minister Wang Yi repeated Beijing’s call for dialogue at what it says is a critical juncture.

On Saturday, the UN unanimously passed a resolution expanding existing sanctions by banning North Korean exports and limiting investments in the country.

The Chinese foreign minister said sanctions were necessary but not the ultimate goal. He met his North Korean counterpart Ri Yong-ho on Sunday for talks he later described as “thorough” and which appeared to be cordial.

“The Chinese side urged the North Korean side to calmly handle the resolutions the UN Security Council just made towards North Korea and to not do anything unbeneficial towards the international community such as a nuclear test,” Mr Wang said.

There were two major components in the UN resolution, said Mr Wang.

“One is to make a necessary response to the [Democratic People’s Republic of Korea] DPRK’s constant missile launch activities which have violated UN Security Council resolutions in a bid to effectively check DPRK’s nuclear and missile development programmes,” he told the Xinhua news agency.

The UN first imposed sanctions on North Korea in 2006 over its ballistic missile and nuclear programmes. The new round of sanctions comes after North Korea staged five nuclear tests and four long-range missile launches.

Under the terms of the new sanctions, contained in a resolution drawn up by the US, North Korean exports of coal, iron, iron ore, lead, lead ore and seafood are banned, and countries are forbidden from hiring additional North Korean workers. The sanctions also forbid new joint ventures with North Korea.

China, which holds a veto on the UN Security Council, was North Korea’s ally in the Korean War (1950-1953) and has long tried to shift the focus from sanctions or military threats to dialogue.

It is particularly keen to resume the Six Party Talks, hosted by China and including both Koreas, the US, Russia and Japan. However, North Korea abandoned the talks in 2009 and has since called for bilateral talks with Washington, bypassing China and other regional players.

On Monday, regional leaders are gathering for the South and South East Asian Nations (Asean) Regional Forum. The forum hosts 27 foreign ministers – including China, the US, Japan and North and South Korea – to discuss security issues and the North Korean nuclear crisis is expected to dominate. – (Additional reporting: agencies)

5 Vaccinate 70% of adults against Covid-19 by summer, EU urges