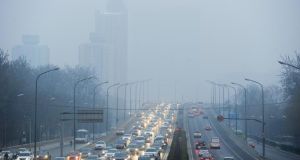 Mr Zheng said temperature rises in China were already higher than global averages and that climate change would cut crop yields, cause environmental degradation and make for unstable river flows.

“As the world warms, risks of climate change and climate disasters to China could become more grave,” Mr Zheng was quoted as saying by the Xinhua news agency. “To face the challenges from past and future climate change, we must respect nature and live in harmony with it. We must promote the idea of nature and emphasise climate security.”

China’s economic success story has been accompanied by a disastrous record on the environment, with the majority of the world’s most polluted cities in China, and 90 per cent of Chinese cities failing to meet their own government standards, according to the World Bank.

Climate change was a “serious threat” to a number of mega-projects including the Three Gorges Dam, a railway connecting Tibet with northwest China, and a huge scheme to divert water from the country’s south to its dry north.

As the world’s two biggest economies, China and the US are the world’s two largest polluters, producing about 45 per cent of the world’s carbon dioxide between them. In November last year, the two countries agreed to strengthen co-operation on cutting greenhouse gases and pledged to reduce emissions, raising the possibility of a deal at climate change conference in Paris this year.

China has stepped up the rhetoric on environmental issues in recent months and has appointed a well-respected expert on climate change, Chen Jining, as minister of environmental protection.

In his speech to China’s annual parliament, the National People’s Congress, the premier, Li Keqiang, said that the government would work on legislation for environmental protection tax and must strictly enforce environmental laws and regulations, crack down on those guilty of illegal emissions and ensure they pay a heavy price for offences.