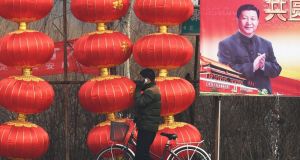 A man walks past a billboard featuring a photo of China’s president Xi Jinping beside lantern decorations for the Lunar New Year in Baoding, China’s northern Hebei province, on Tuesday. Mr Xi has unveiled his latest political slogan, the “Four Comprehensives”, a call for a more prosperous country and deeper reform. Photograph: Greg Baker/AFP/Getty Images

With a week to go until the National People’s Congress, China’s annual rubberstamp parliament, President Xi Jinping unveiled his latest political slogan, the “Four Comprehensives”, a call for a more prosperous country and deeper reform.

Since he came to power in late 2012, Mr Xi has been talking about his “China Dream” vision of economic development, otherwise known as “the great renewal of the Chinese nation”.

Economic growth is slowing in China – gross domestic product growth eased to 7.4 per cent in 2014 year, the lowest since 1990, and the government in Beijing expects growth of about seven per cent for this year.

According to the editorial in the People’s Daily, the theory reflected “the aspirations of the masses” and was fundamental to resolving a crucial foundation to solving the problems that the nation faced

Stirring political slogans are common in Communist China. The People’s Republic’s founding father Mao Zedong was fond of them, such as his call to “smash the four Olds” – Old Customs, Old Culture, Old Habits and Old Ideas.

These political philosophies are often the legacies that leaders choose to leave behind them and ensure their names glow in the pantheon of the great Communist leadership.

“The Four Comprehensives will ensure China continues steadily on its path of development,” the Xinhua news agency reported.

Li Tuo, a politics professor at the Chinese Academy of Governance, told Chinese radio that the concept carried “great significance.”

“The concept answers the question of how to practically achieve the great renewal of the Chinese nation. In my own opinion, it is the latest theoretical fruit of the sinicisation of Marxism,” said Mr Li.

“Although China has become the second largest economy in the world, there are still many impoverished areas across the country. To build a comprehensive and moderately prosperous society requires the government to give more support to these areas,” said Mr Li.

Reform is central to the principles. As Xinhua pointed out, Mr Xi’s first trip as China’s leader was to the southern economic hub of Shenzhen, still symbolically associated with former supreme leader Deng Xiaoping’s reforms. When in Shenzhen, Mr Xi promised “no stop to reform and opening up”.

The attack on corruption has been an ongoing theme, and the leadership has said it believes graft could threaten the very survival of the Party and the state.

In the latest development in the fight against corruption the Central Commission for Discipline Inspection (CCDI) said on its website that it will publish confessions by corrupt officials “to warn and educate others”.

“Behind every corruption case lies the shadow of a lost model of power, behind every book of repentance hides the remorse of self-blame and self-hate,” the CDDI said.