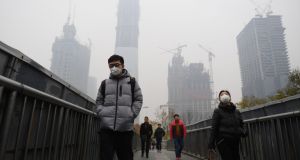 China’s smog problem is back with a vengeance this week, with authorities issuing alerts and government officials warning that the country faces a formidable task to beat pollution, a “persistent affliction to people’s hearts and lungs”.

A courier delivering replacement filters for air purifiers says he is “much too busy” while pedestrians and cyclists wear masks against the smog, which contains very unhealthy levels of PM2.5 microparticles – motes of dust around 40 times smaller than the width of a human hair which can lodge deep in the lungs and trigger cancers.

Against this backdrop, a Beijing-based French start-up has produced a 3D interactive map of the world showing global air pollution which allows users to track changes, as well as observe the interaction between pollution and weather patterns.

“Even with the increasing amount of data available to turn often invisible pollution into tangible numbers, it can still be a challenge to feel these statistics in a meaningful way,” AirVisual Earth’s founder Yann Boquillod says.

The main sources of pollution in Beijing are coal-fired power plants around the city and neighbouring regions, and exhaust emissions from the more than five million motor vehicles that cross the city every day. Add to this dust storms from the north and particles expelled from local building sites and you have a toxic cocktail.

“With AirVisual Earth, we wanted to make air pollution completely visual. We want to engage people with the problem in a new way, by clearly showing the Earth’s health and help people realise that the planet is sick from our human emissions,” says Boquillod.

New research this week by Greenpeace and the Beijing Environmental Mutagen Society shows that all three elements have fallen substantially. Arsenic concentration levels fell by 90.4 per cent and now meets the national standard.

“The fall in heavy metals concentrations in PM2.5 in Beijing is directly linked to the closure of coal-fired power plants around the city,” says Greenpeace East Asia climate and energy campaigner, Dong Liansai.

AirVisual Earth’s data bears out the trend that pollution is being reduced in Beijing – it is considerably better than it has been in the past, and the government has been making a major effort.

In 2014, then-Beijing mayor Wang Anshun vowed to cut off his own head and hand it to the party leadership if pollution wasn’t brought under control by 2017.

Perhaps fearful for the cadre’s health, this month the leadership moved Wang to the state council’s development research centre, and installed Cai Qi, an ally of Chinese president Xi Jinping, as acting mayor.

Wags on social media are calling for Wang to return and deliver on his promise if the smog is not gone by the end of next year.

Officials have again pledged to try to deal with the issue. “China should strive to resolve the affliction to people’s hearts and lungs in the shortest time possible,” Zhao Yingmin, vice-minister of environmental protection, told a news conference.