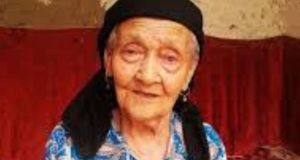 Alimihan Seyiti, who was born in 1886, during the latter years of the Qing dynasty. She said her long life may have something to do with her habit of drinking cold water all year round, and her relatively youthful appearance was down to “washing her face”. Photograph: xjdail.com

A 127-year-old woman living in Kashgar in the far western Chinese region of Xinjiang has been named by the Geriatric Society of China (GSC) as the world’s oldest woman and is now awaiting global recognition of her longevity.

Alimihan Seyiti was born on June 25th, 1886, during the latter years of the Qing dynasty. She said her long life may have something to do with her habit of drinking cold water all year round and her relatively youthful appearance was down to “washing her face”.

Relatives told the Global Times newspaper that she was considered the village’s most eligible young woman when she was married at 17. “Back then I had quite a few suitors,” she said.

She was hailed as China’s oldest supercentenarian in June by the GSC following the death of Luo Meizhen in Guangxi Zhuang region, who was born in 1885.

Ms Seyiti prides herself on being able to shop at the local bazaar in the largely Muslim area and visit friends without help. She also enjoys telling jokes and singing traditional Uighur love songs.

Adopted children
Ms Seyiti did not have children of her own, but has an adopted daughter and son. She lives with her adopted daughter and has 40 grand- and great- grandchildren. “My favourite is my 15-year-old great-grandson. He comes to visit me every week,” she told the paper.

She comes from a very long- lived region. Wang Feng, deputy director of the GSC, claims there are eight centenarians in Shule county, which has a population of just below 300,000.

“We will nominate Shule county as a Chinese longevity cluster this October when China’s top-10 oldest people will be announced,” Mr Wang said.

It is a hotly contested title. Fu Suqing, from Chengdu, is waiting for Guinness World Record officials to approve her request after the previous bearer, Jiroemon Kimura, died in June aged 116.

Meanwhile in Bolivia it is reported that a man living in a remote village in the Andes is 123 years old. According to baptism records, Carmelo Flores Laura, who lives in a straw- roofed hut in the village of Frasquia near Lake Titicaca, was born on July 16th, 1890.

A supercentenarian is considered verified only if the claim has been validated by recognised international institutions such as the Gerontology Research Group or Guinness World Records.