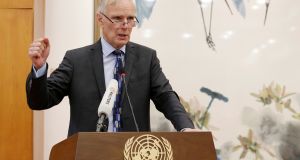 Philip Alston, the UN’s special rapporteur on extreme poverty and human rights, at a news conference in Beijing on Tuesday. He said that China’s great progress in poverty alleviation has been accompanied by the emergence of very high levels of inequality. Photograph: Jason Lee/Reuters

China has had extraordinary success in alleviating poverty, the United Nations special rapporteur on extreme poverty and human rights has said, but it still faces challenges to boost accountability and reduce inequality.

“China’s development attainments are unquestioned, but my task is to consider whether they also translate into ensuring full respect for the human rights of its people,” said Philip Alston, a law professor at New York University who acts as one of the UN’s team of special rapporteurs that advises the international body on human rights issues.

He made his comments in a mission statement delivered at a news conference in Beijing, at the end of an eight-day visit to China, which included a visit to Beijing and several days spent in Yunnan province.

The report was carefully worded and made significant efforts to highlight China’s successes in reducing poverty, but it also contained some strong criticisms, particularly in the area of accountability. It pointed out that China’s great progress in poverty alleviation has been accompanied by the emergence of very high levels of inequality.

“The most difficult and complex challenge in this respect is to understand how the leading role of the Communist Party can co-exist with the recognition of individual rights and the provision of meaningful accountability mechanisms which are an indispensable element in a human rights framework,” Mr Alston said.

The report cited government data showing that 5.7 per cent of China’s population was still living in extreme poverty at the end of last year, with the rates varying from as high as 10 per cent in western China to 1.8 per cent in the east.

Among vulnerable groups the rates were higher: ethnic minorities(12.1 per cent), and the elderly and young people, for whom the rate is above 9 per cent.

China has lifted some 700 million people out of poverty in the past three decades, in what Mr Alston termed “a staggering achievement”.

On the issue of accountability, he said Mr Xi’s crackdown on corruption showed how widespread official graft had been, and this highlighted the need for effective mechanisms. He said that a system where government officials carry out sporadic control checks over other officials was no substitute for providing avenues for citizens to complain and seek remedy for abuses.

“The problem is that it is extremely difficult to identify any effective mechanisms of this sort, despite the plethora of procedures that exist in theory,” he said.

The petitioning system, where people write letters to the authorities to press their complaints, had “significant structural shortcomings”.

“Many interlocutors suggested they would be surprised if even 1 per cent of cases were resolved in a manner that the petitioner would consider satisfactory. It is not surprising that outcomes are often reported as leading to violence against or by petitioners,” he said.

There was also the route of writing to the standing committee of the annual parliament, the National People’s Congress, but that had resulted in action in only a couple of instances over the years.

“The next option is to hire a lawyer. In straightforward cases of official misconduct or flouting the law, a local lawyer might be able to obtain relief. But if the matter requires the public airing of policy considerations, the crackdowns on human rights lawyers and labour lawyers, combined with the strengthening of what have been termed control mechanisms for lawyers, have made it very difficult for lawyers to be other than governmental facilitators.”