China: Gender imbalance ‘most serious’ in the world 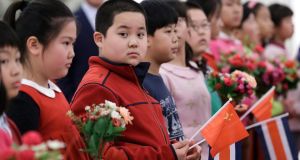 China faces the prospect of becoming the first country in the world to get old before it gets rich. Photograph: EPA

Chinese health authorities on Wednesday described the gender imbalance among newborns as “the most serious and prolonged” in the world, a direct ramification of the country’s strict one-child policy.

The statement will add to growing calls for the government to scrap all family planning restrictions in the world’s most populous nation, which many scholars say faces a demographic crisis.

Like most Asian nations, China has a traditional bias for sons. Many families abort female foetuses and abandon baby girls to ensure their one child is a son, so about 118 boys are born for every 100 girls, against a global average of 103 to 107.

“Our country has the most serious gender imbalance that is most prolonged and affecting the most number of people,” said the National Health and Family Planning Commission.

The agency said it would step up supervision on foetal sex determination, which is banned in China. It acknowledged that women were transferring blood samples overseas to determine the genders of their babies as part of an “underground chain for profit”.

“This has further exacerbated the gender imbalance in our country’s birth structure,” said the agency.

Researchers have warned that large sex-ratio imbalances could lead to instability as more men remain unmarried, raising the risks of anti-social and violent behaviour.

In late 2013, China said it would ease family planning restrictions to allow millions of families to have two children in the most significant liberalisation of the one-child policy in decades.

Critics say the relaxation of rules was too little, and came too late to redress substantial negative effects on the economy and society. Analysts say China faces the prospect of becoming the first country in the world to get old before it gets rich.

State media said earlier this month that a year after China eased its one-child policy, fewer people than expected have applied for permission to have a second child.