Seven of 15 armed groups declined to participate over disagreements 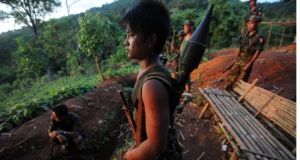 The All Burma Students Democratic Front has signed the ceasefire. Photograph: AFP

The Government of Burma, also known as Myanmar, and eight armed ethnic groups signed a ceasefire agreement on Thursday, the culmination of more than two years of negotiations aimed at bringing an end to the majority of the country’s long-running conflicts.

The deal fell short of its nationwide billing, with seven of the 15 armed groups invited declining to sign due to disagreements over who the process should include and ongoing distrust of Burma’s semi-civilian government and its still-powerful military.

President Thein Sein, a former general, made the nationwide ceasefire a key platform for his reformist agenda after taking power in 2011 and ending nearly 50 years of military rule.

While the absentees were a blow to the president, who pushed for the deal to be signed ahead of a November 8th general election, he described the deal on Thursday as historic.

“The nationwide ceasefire agreement (NCA) is a historic gift from us to our generations of the future,” Thein Sein said at a signing ceremony attended by hundreds of diplomats, officials and rebel group representatives in the country’s capital.

“This is our heritage. The road to future peace in Burma is now open.”

Thein Sein said he would continue with efforts to convince other groups to join the ceasefire later.

Among those that signed was the Karen National Union (KNU), Burma’s oldest armed group. The KNU has fought one of the world’s longest running conflicts with the Burma military spanning nearly 70 years.

“The NCA is a new page in history and a product of brave and energetic negotiations,” Saw Mutu Say Poe, the chairman of the KNU, said at the ceremony.

US president Barack Obama, who has portrayed his country’s backing of Burma’s reforms as a foreign policy success, has pushed Thein Sein to conclude the ceasefire as part of wider changes to protect minorities.

“The United States commends all sides for their ongoing efforts to bring an end to the longest-running civil conflict in the world,” the US State Department spokesman John Kirby said in a statement on Thursday.

The US remained concerned about reports of continued military offensives in the Kachin and Shan states and lack of humanitarian access to 100,000 displaced people in those areas, he said.

The United Wa State Army, believed to be the largest and best equipped of the country’s armed ethnic groups, has remained largely on the sidelines of the peace process since its beginning and did not sign.

The group’s armed wing, the Kachin Independence Army, has clashed regularly with the Burma military since 2011, when a 17-year ceasefire between the two broke down.

An official from the government-linked Myanmar Peace Center said the two groups, which operate on the Myanmar-China border, had come under pressure from China not to sign. China has denied these allegations.

All of the groups signing were removed this week by the government from its list of Unlawful Associations.

The colonial-era law was used to prosecute people who had contact with the groups. The removals could be a crucial step to the groups joining the political mainstream.