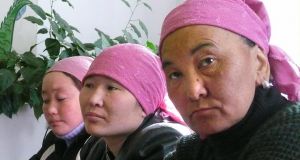 Post-kidnapping Kyrgyz women: a quarter of all marriages in Kyrgyzstan are believed to involve bride kidnapping. Photograph: STR/AFP/Getty Images

Kyrgyzstan is an Islamic former Soviet republic of 5½ million people, 800,000-odd of them in Bishkek, the capital. Ethnic Kyrgyz have a history of hoof prints that goes back to the Mongol Empire and clashes with the father of nomad horse culture, Ghengis Khan.

A quarter of all marriages here are believed to involve some element of bride kidnapping. One psychologically simple theory is this: when a male and his pals borrow a beat-up car to swoop down and abduct a young woman as a potential bride, they feel the nomad pulse beating in their heart.

“People use justifications for bride kidnapping: ‘Aaah we always did this. As nomads it’s how we carried off our women.’ It’s a highly romanticised vision,” says David Gullette, an anthropologist and author of The Genealogical Construction of the Kyrgyz Republic: Kinship, State and Tribalism.

“There is the economic argument: ‘I can’t afford to pay for a bride or a wedding.’ You are expected to pay a bride price and host the family. You kill sheep, kill a horse – a horse can cost $2,000. With subsistence agriculture, that’s way more than you can afford. Then men will also say ‘She wanted to be taken – she likes me.’ Just any misogynistic view that they’ve got.”

Bride kidnapping takes two forms: light and extreme. In the first, a couple escape expense. A young man must present his in-laws with a reverse dowry; a wedding must be funded; and parents might oppose it anyway. So he kidnaps his girlfriend: she knows it will happen but not when. A car pulls up and she is bundled off. She resists in a show of coquettish behaviour. She is taken to her boyfriend’s parents’ house, where his mother, sisters and her own friends convince her to marry. A headscarf is highly symbolic. When she agrees to wear it, the marriage is on.

But more sinister is the extreme case. A woman is tricked or manhandled into a car. In confusion and tears, she is dragged to the house. The kidnapper’s mother and sisters force her to don the headscarf. This final gang is female, a reverse sisterhood that coerces the victim. Traumatised and threatened, she fights the logics of “This is how life is, love.” She may already have a boyfriend. By morning, a culture of shame enshrouds her. If she returns to her parents they will say she has spent the night away and damaged any other marriage prospects. She may in fact have been raped.

“Bride kidnapping has always been a crime. It does not need to be clearly specified as an article of the criminal code. The crime of rape and coercion exists. ‘Bride kidnapping’ is misleading. There is no bride in the picture,” says Lucio Sarandrea, in downtown Bishkek. He is the United Nations Development Programme chief technical adviser on the rule of law. “Due to stigma, women are regarded as being guilty for having put themselves in this situation.” Fear doctors behaviour: “Women are afraid to go out. Women are getting married early to remove themselves from the possibility of abduction.”

The crimes are varied: abduction, rape (an estimated one in three cases), other physical and moral violence: “We are putting in place free legal advice and representation: 40 per cent of lawyers in Kyrgyzstan have agreed to give up to 50 hours per year pro bono to victims of domestic violence,” says Sarandrea. Such support can assist with divorce, inheritance, child access and alimony. “There is also a possibility to consider the marriage null and void as it was the result of physical and moral duress.”

Dinara Musabekova is from Bishkek and is executive director of the Eurasia Foundation of Central Asia. “Bride kidnapping comes out of our tradition. But now it is more like sexual abuse against women. The last statistic is about seven kidnappings a day. The government adopts new regulations but local people don’t go to the police because of their neighbours or relatives. Also our girls have low literacy about their rights.”

What about male understanding of violence? “I think one arrest would be good for all men to show it is the wrong way to get married. There are no published cases and no media coverage and everyone thinks it is normal life, except for active citizens who see a role for workshops, training and campaigns. Women need shelter from sexual and domestic abuse.” But there are few shelters and they hold just a few dozen women – and their children.

Socioeconomics cast bride kidnapping as a retirement plan for Kyrgyz parents. The youngest male must live at home with his spouse. If he is slow to acquire one, he may be goaded by his mother. Once the bride is acquired, the household enjoys a domestic skivvy to nurse his ageing parents.

“It is an extremely shameful thing. What we want to do is turn the shame culture around,” says Gerald Gunter, of UNWomen, in his office off Koenkozova Street. “We say you can be proud of your culture, which is nomadic and horses, but this is not your culture driving around in a car and forcibly getting a girl. This is a crime. The parliament has brought in article 155 which increases the sentence to 10 years. This has not really been enforced but it scares people who now realise it is criminal.”

Law and punishment wrestle with culture and society, as Sarandrea knows: “There is very little hard detail about bride kidnapping. People are not willing to report it but also not willing to talk about it because of the social stigma. These crimes happen not in society but in a community. You would not be only prosecuting the kidnapper, you would be prosecuting the entire group.”

People in villages around Kant and Tokmok to the east of Bishkek say kidnapping is dying out. A young shop worker believes it would never happen to her but it has to her friends. A Dungan Chinese Muslim says it exists in her culture too. An Azeri woman acknowledges it. A friendly young man says his friends have kidnapped. He will too if need be. They all know it is a crime.

Education and economic progress, along with reaching rural areas using phone apps, will be the way forward. “In some villages, it is the religious people who said ‘This is totally wrong, it is against the Koran’ and they were really active in combatting it. You don’t really know who your allies are – it could be very religious people, very secular or women’s rights activists, whatever,” says Gunter. “A lot of the young guys now say ‘Hey I respect myself. I don’t have to steal a girl – I am a cool guy. Girls will run after me.’”

Case studies: ‘I hid in a press, but they found me’

Gulmira’s escape and empowerment
Gulmira was tricked by a guy and girl she knew and driven away from Karakol by Issy Kul lake in northeast Kyrgyzstan.

“I ran into a post office screaming. I hid in a press. But they found me. ‘It’s your destiny. He loves you,’ they said. They put the scarf on my head. I said I would stay and used tiredness to fend him off.”  At 6am, wedding preparations began.  She ran off wearing slippers.

“I hid in a cemetery – maybe the dead could help me. I saw them looking for me on horses.” She flagged down a driver and escaped.

“My mother was progressive – we did not tell my father for years. But maybe the women cursed me. I married a lovely guy but we divorced with no kids. Then I married again. He got cancer and died after eight years. Maybe it is a curse, a destiny. That girl – I don’t speak to her. She was kidnapped herself later and divorced. Now she knows.

“Are we animals to be kidnapped and raped? It made me strong. I have a good career. People have to be educated, girls told they have the same rights. Cases like mine have to be published.”

Meerim’s three kidnappings
Meerim was kidnapped twice at college where she was studying in Biskek, at 19 and 22. She used her negotiation skills to confront both abductors. In the second kidnapping, the man and his mother were reduced to tears as she rejected them and claimed her right not to be violated. “But I had stepped into the room. He did not touch me but my mother was offended and worried someone in the village would find out. It was hard psychologically afterwards.”

After two years of withdrawal, she was approached by a woman asking questions on behalf of her son. “His mother said to me: ‘I like you and we will not stand in the way of anything you want to do.’”

This third time, she consented to the ritual. “I did not like him. I planned to divorce after two months maximum but years later we have two children. I don’t love him as a man but as the father of my children. He took me because he saw my photo. He says it was love at first sight.”