Battle over US military base in Japan intensifies

Okinawa construction has led to activists being dumped offshore 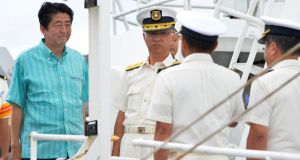 A diminutive, silver-haired warrior, Fumiko Shimabukuro (85), has one goal: to stop a US military base from being built near her home. For nearly two decades, she has been an iconic local figure in the struggle against the Marine facility in Japan’s Okinawa prefecture. Now the battle that has defined her sunset years appears to be nearing a climax.

Shimabukuro was recently knocked unconscious in scuffles with the police. She is one of over a dozen elderly protesters injured since Japan’s government began last year its long-delayed survey to build the base. This week, US security detained two demonstrators, intensifying a standoff that has becoming increasingly treacherous.

The two protesters were released after angry Okinawans converged on a local police station. Coast guard officers have recently taken to grabbing anti-base activists from kayaks and dumping them 4km offshore. Many fear it is only a matter of time before someone is badly hurt or killed.

Over 1,000 miles from Tokyo, Okinawa shoulders the weight of Tokyo’s six-decade military alliance with Washington. Locals resent the heavy American military presence: 19,000 marines and dozens of military installations, including the US army’s only jungle warfare training centre, all on Okinawa’s tiny main island.

Opinion polls suggest over 80 per cent of Okinawans do not want any building off Henoko. In November, governor Takeshi Onaga was elected essentially on a single issue. “I’ve made it my goal not to allow the construction of a new base,” he said after his landslide victory.

That puts him on a collision course with Tokyo and Washington. For decades, the Americans have promised Japan military protection in Asia in return for bases and cash. Both sides are now trying to retool this subordinate relationship to give Japan a greater military role in the region.

Last month, his government passed a record defence package worth 4.98-trillion yen (€37 billion), Japan’s third straight annual rise. The budget tags money for a radar base on the tiny frontier island of Yonaguni, the closest Japanese territory to mainland China.

The budget rise is part of a strategic shift to the country’s south and southwest, where China and Japan are in dispute over tiny islands in the East China Sea. Gen Nakatani, the defence minister, cited the “changing situation around Japan”, now shorthand for the turbo-charged rise of China.

Onaga this month ordered a review of his predecessor’s controversial decision to green light the base. But the review is not due to release its findings until the summer, by which time it may be too late to stop construction. Workers have begun laying giant concrete blocks around the bay, destroying its coral, say the protesters.

She was injured while cowering from US troops in a cave. Like many Okinawans, she believes they were used to slow the American advance to the Japanese mainland.

She and hundreds of others maintain a 24-hour vigil outside Camp Schwab, trying to block trucks. “As long as I’m alive, I will fight the government’s plans to build here,” she said. The danger for her opponents is that they may win the fight for the base, but lose the battle for hearts and minds on this tiny Pacific speck.