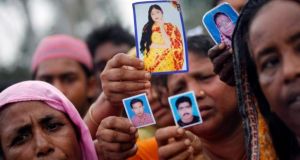 The collapse of the Rana Plaza building outside Dhaka resulted in the death of 1,130 people, mostly garment workers. Photograph: Andrew Biraj/Reuters

Bangladesh’s Anti-Corruption Commission (ACC) has filed a case with local police accusing 17 people of breaching regulations over the construction of a building that collapsed last year, killing over 1,130 mostly garment workers.

The April 2013 collapse of Rana Plaza, built on swampy ground outside Dhaka, ranks amongst the world’s worst industrial accidents and sparked a global outcry for improved safety standards in the world’s second-largest exporter of ready-made garments.

The accused include the parents of Mohammad Sohel Rana - the individual previously cited as the owner of Rana Plaza - as well as a local mayor, engineers and three owners of garment factories that used the building.

They do not include Mr Rana himself, who was arrested after a four-day hunt shortly after the building collapsed, apparently trying to flee across the border to India.

ACC spokesman Pranab Kumar Bhattachajee said Mr Rana’s name did not appear in documents covering ownership of the land and design approval, which instead listed his parents as owners.

Of the 17 accused, Mr Bhattachajee said: “Our investigation found, they grossly breached the building code.”

Municipal authorities gave permission for extra floors in the building, but they had no such authority, he added.

The ACC will now appoint an official to conduct a further investigation that may result in a charge sheet being filed to a court.

Companies are split over how to improve conditions. Big European firms signed an accord that would make them legally responsible for safety. US groups such as Wal-Mart Stores Inc have broken ties with non-compliant factories.

Late last year, the government raised the minimum wage for garment workers by 77 per cent to 5,300 taka (€50) and amended its labour law to boost worker rights, including the freedom to form trade unions.