Up to 40 per cent of electorate expected to vote early 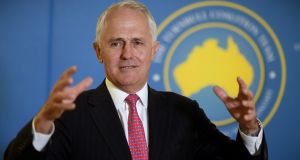 Australian prime minister Malcolm Turnbull: “We will win on July 2nd . . . Australians will return us to government.” Photograph: Lukas Coch/EPA

Though Australia’s election is not officially until July 2nd, up to 40 per cent of people will vote before then in pre-polling, which started on Tuesday.

Prime minister Malcolm Turnbull, of the Liberal-National coalition, greeted the start of voting with a confident prediction. “We will win on July 2nd . . . Australians will return us to government,” he said.

Bill Shorten, leader of the opposition Labor Party, said Turnbull was counting his chickens too early. “That kind of arrogance comes from being seriously out of touch. It is typical of the Liberals’ ‘born to rule’ mentality,” he said. “The people who will decide the future of this country are 16 million Australians, not Mr Turnbull.” Voting is compulsory in Australia.

“They thought Malcolm Turnbull would be very different. But people have been very frustrated that he has walked away from policies he previously held, such as action on climate change, same-sex marriage and Australia becoming a republic.”

While the main game is between the government and Labor, there are several seats where Labor is being closely challenged by the Greens.

Brendan O’Connor, Labor’s Kerry-raised employment spokesman, made a bit of mischief by issuing Greens leader Richard Di Natale with a 24- hour ultimatum to provide evidence au pairs employed to look after his children were properly paid.

Di Natale’s response was to say the major parties were ramping up their attacks because “nothing brings the Coles and Woolworths [Australia’s dominant supermarket chains] of politics together like a bit of competition from outside their cozy duopoly”.

Ireland became an election issue this week when it emerged recruiters for the national broadband network are hiring Irish telecoms staff to move to Australia to work on the massive multibillion-dollar project.

Jim Metcher of the Communication Workers Union blamed the Turnbull government and said jobs would be “dished out to workers in Kilkenny, not Sydney; in Tipperary, not Londonderry; in Dublin, not Condobolin; Belfast, not Belgrave. It’s a disgrace”. (Londonderry is a suburb of Sydney, by the way. Metcher was not entering the fraught world of Northern Ireland politics.)

The parties are still tied 50-50 after preferences, but the bookies are not giving Labor much chance of winning.