Australian PM stresses need for certainty ahead of election 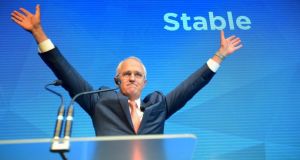 Years from now, when historians look back at Australia’s federal election of 2016, one day will stand out as having more significance than the polling day of July 2nd. That day is June 23rd, when the United Kingdom voted to leave the European Union.

On Friday, as Europe woke up to its most significant moment since the fall of the Berlin Wall, prime minister Malcolm Turnbull took full advantage. “Now more than ever, Australia needs a stable, majority coalition government,” he said in a national television interview.

Turnbull continued in the same vein yesterday. In a 40-minute address at the Liberal-National coalition’s official launch (seven weeks into an eight-week campaign), he promoted his government’s economic credentials. “The shockwaves in the past 48 hours from Britain’s vote to leave the European Union are a sharp reminder of the volatility of the global economy,” he said.

“Our clear economic plan is more essential than ever as we enter this period of uncertainty in global markets. Calm heads, steady hands and a strong economic plan are critical for Australia to withstand any of these negative repercussions.”

Up until the game-changing Brexit vote, the opposition Labor Party had been gaining traction by saying the coalition planned to privatise Medicare, Australia’s universal health system. The government accused Labor of running a scare campaign, saying privatising Medicare is not coalition policy.

But Labor has learned from the best on that score – the coalition has won election after election with the help of scare campaigns about asylum seekers, interest rates and national debt.

The irony is that Labor was in power when the global financial crisis hit in 2008. Turnbull was then the opposition leader and supported most of what Labor did. As a result of Labor’s astute management of the economy, Australia was the only developed country not to go into recession in 2008-09.

If any party has form on guiding an economy through turbulence, it’s Labor.

The polls still have the parties at 50-50 after preferences, but Labor needs to gain 21 seats to win power. Even before the blow of Brexit, senior Labor figures say they feared the party was only likely to gain 13 to 15 seats. This is backed up by a poll of five marginal Sydney seats Labor is targeting. In each, Labor’s numbers have gone backwards and it may only win one of them.

Polling and bookies are pointing towards the coalition retaining power in Australia, but they also said the UK would remain part of the EU.

Labor will spend every hour until Saturday repeating the mantra that the Liberals and Nationals are a threat to health and education.

They will also be saying Turnbull, a small “L” liberal in party of conservatives, signed a Faustian pact with the right wing of the Liberals in order to win their backing so he could overthrow former prime minister Tony Abbott in an internal coup last September.

Labor will say Turnbull has given up on his core beliefs and fundamental values, such as same-sex marriage and tackling climate change, and that he will just offer more of the same if he wins the election.

Regardless of who wins on Saturday, given the recent history where no prime minister has served a full term since 2007, Australians could be left wondering if the victor will still be PM in six months.