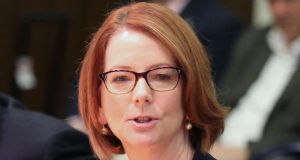 Australian prime minister Julia Gillard who responded to being asked about her partner’s sexuality interview by warning that such questioning could discourage women from entering public life. Photograph: Getty

An Australian radio host has been sacked after asking prime minister Julia Gillard about her partner’s sexuality during a live interview.

Perth radio station 6PR dismissed host Howard Sattler, having earlier suspended him, after he repeatedly asked Ms Gillard in the interview whether Tim Mathieson’s profession as a hairdresser meant he was homosexual.

“I want young girls and women to be able to feel like they can be included in public life and not have to face questioning like the questioning I faced,” Ms Gillard told reporters today, echoing concerns raised by Sex Discrimination Commissioner Elizabeth Broderick.

The fallout capped a week in which gender and sex dominated the political agenda three months from an election that opinion polls indicate Ms Gillard’s Labour party will lose in a landslide.

The nation’s first female prime minister placed gender into the spotlight when she signalled a coalition government led by Tony Abbott may wind back abortion rights and see women’s voices banished from frontline politics.

Ms Gillard, during yesterday’s interview with Mr Sattler, said “vile and offensive” speculation is regularly circulated about her online, after she was pressed on whether she lived with Mr Mathieson in a heterosexual relationship.

“We live there together as a couple,” she said. “To all the hairdressers out there, including to all the men who are listening, I don’t think in life one can actually look at a whole profession full of different human beings and say: ‘Gee, we know something about every one of those human beings.’ I mean, it’s absurd.”

6PR radio station management said Mr Sattler pursued a line of questioning with Ms Gillard “that was disrespectful to the office and the person of the prime minister and was entirely inappropriate.”

Ms Gillard revived the gender debate in a June 11th speech to a Labour fundraiser when she said: “We don’t want to live in an Australia where abortion again becomes the political plaything of men who think they know better.”

The abortion assertion was condemned by deputy liberal party leader Julie Bishop, the senior female in Abbott’s opposition, who described it as a “crude political ploy” from a desperate prime minister and reiterated that the coalition had no plans to change current laws.