Row over withdrawal of government services from remote indigenous settlements 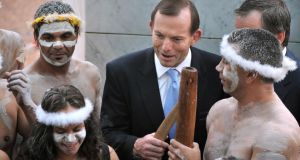 Australia’s prime minister Tony Abbott has defended his comment that Aborigines in remote settlements facing the withdrawal of government services are making a “lifestyle choice” by choosing to live where they do.

Speaking about the threatened forced closure of up to 150 indigenous communities in outback regions of Western Australia, Mr Abbott said: “What we can’t do is endlessly subsidise lifestyle choices if those lifestyle choices are not conducive to the kind of full participation in Australian society that everyone should have.”

Aboriginal leaders expressed shock at the tone of Mr Abbott’s words. “I’m just bitterly disappointed to hear this deranged debate go on in the substandard manner in which it’s being conducted,” said lawyer Noel Pearson.

Warren Mundine, the prime minister’s chief adviser on Aboriginal affairs, also spoke out against Mr Abbott’s comments. “I’m being very polite here: I think it was very silly of him to use those words, because he did have a very strong message to put out there, which is something we have to talk about.”

There are 274 remote Aboriginal communities in Western Australia that became the responsibility of the state government when the federal government transferred funding responsibilities back to it.

Now the Western Australia government is considering closing more than half of those communities, saying it can no longer afford to maintain power and water to all of them.

Justine Brown, a resident of Breedee, one of the threatened communities, says she prefers living there than in a bigger town because it is safe. “We like living in the bush . . . [to] get away from trouble,” she told ABC television. Ms Brown also said Breedee was a good place to raise children.

However, some Aboriginals agree with the proposed closures, including a nurse who works in some of the communities. “It is an unacceptable way tolive,” said the nurse, who wished to remain anonymous.

“There are no safe houses for those wanting to remove themselves from ongoing domestic violence. Alcohol is a problem, as is prolific scabies, non-compliance with medication, non-attendance at school and an expectation that the nurses can work 24/7, 365 days a year,” the nurse said.

The premier of Western Australia, Colin Barnett, expressed support for the prime minister’s views. “[It was an] unfortunate choice of words, but Tony Abbott has a lifetime of commitment to Aboriginal people and would be more knowledgeable about Aboriginal people and their conditions and their history than probably almost anyone in federal parliament,” he said

Mr Mundine hoped there would now be a mature debate about the future of remote communities. He said governments could not force people from the land, but remote residents would have to live within the economic realities.

“I’ve got a meeting coming up with the prime minister next week. It’ll be a fun meeting,” Mr Mundine said. “It’s a discussion that’s got to be very frank, very focused, because we are living in a very tight budgetary round.”