January 26th marks start of European settlement, but many find it offensive to Aboriginals 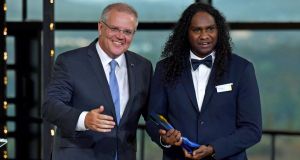 Australia’s now annual battle over the meaning and legitimacy of its national day has become more contentious than ever this year.

A group of right-wing MPs from the ruling Liberal-National coalition is pushing for new legislation to ensure that Australia Day – which falls this Saturday – continues to be celebrated on January 26th and under that name.

“A law to protect Australia Day will give Australians peace of mind that their national day will survive attempts from a very small and vocal minority that seeks to create division where there is unity, for political gain,” Liberal MP Dean Smith said.

A study released on Friday by the Social Research Centre shows that although 70 per cent of Australians think the current date of the national holiday should stay as it is, 45 per cent believe the date is offensive to Aboriginals and Torres Strait Islanders, many of whom refer to January 26th as survival day, or invasion day.

“One school of thought suggests that Australians place a high value on the current date because it is an important marker in the calendar and the last summer public holiday before the school year starts again,” said the report’s co-author, Darren Pennay.

“For some people, the desirability of an end-of-January public holiday – and the lack of an alternative date around the same time of year – seems to outweigh the offence caused to Aboriginals and Torres Strait Islanders.”

With a federal election four months away, both the government and the Labor opposition have ruled out changing the date, though some Labor MPs want it changed, as does the Liberals’ new star recruit candidate, Warren Mundine, who is Aboriginal and a former president of the Labor Party.

Although the election campaign has not yet officially begun, with the government trailing in every poll for the past two years, prime minister Scott Morrison has been using Australia Day to ramp up nationalist sentiment. He has pledged Au$6.7 million (€4.2 million) to fund a replica for the “re-enactment of the voyage” of Captain James Cook’s Endeavour ship around the country. The only problem is, Captain Cook never circled Australia. That was Captain Matthew Flinders, whose remains have just been rediscovered in London.

Landed on the moon

Morrison’s questionable grasp of Australian history saw the hashtag #ThingsCookDid trending on Twitter. According to the tweets, as well as circumnavigating Australia, Captain Cook landed on the moon, invented Australia’s favourite biscuit, the TimTam, and won gold at the 2002 Winter Olympics.

Many Australians, possibly including Morrison, believe Australia Day celebrates the anniversary of Captain Cook’s arrival. But he first set foot on Australian soil on April 29th, 1770.

January 26th actually celebrates the beginning of European settlement – the day in 1788 when, as former prime minister Tony Abbott put it, “Governor Phillip raised the Union flag at Sydney Cove [and] drank the king’s health and success to the settlement.” So, Australia’s national day celebrates a British man flying a British flag and toasting a British king.

The date when Australia Day is celebrated is not likely to change any time soon, but moving it to the date of Captain Cook’s arrival in late April may one day be an option. He is already much honoured across the country, including having a university named after him.

The captain is remembered less fondly in America, though, where locals killed him in 1779 as he tried to kidnap the king of Hawaii.