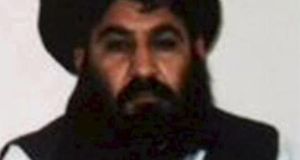 The new leader of the Afghan Taliban, Mullah Mansour, has called for unity and raised the possibility of peace talks with the government in Kabul in a message released on Tuesday to mark the upcoming Muslim festival of Eid. Photograph: Taliban Handout/Handout via Reuters.

The new leader of the Afghan Taliban, Mullah Mansour, has called for unity and raised the possibility of peace talks with the government in Kabul in a message released on Tuesday to mark the upcoming Muslim festival of Eid.

Divisions within the Taliban have threatened to derail fledgling peace talks with the Afghan government and allow the Islamic State group to expand its foothold in the region.

Mansour was hastily appointed Taliban leader in July after Afghan intelligence leaked the news that Omar, the movement’s reclusive one-eyed leader, had been dead for more than two years. Mansour was Omar’s deputy.

Many Taliban commanders oppose Mansour, blaming him for concealing news of Omar’s death and describing his appointment as irregular. Mansour sought to appease disaffected commanders and warned divisions were a creation of the enemy.

“The creation of different groups ... is the last conspiracy of the invaders for continuation of the American proxy war in Afghanistan, ” he said in the Eid message. “God willing, the Afghan Muslim people will, through their strengthening of unity, foil this conspiracy.”

Mansour also raised the possibility of resurrecting peace talks with the Afghan government, but warned others not to get involved. The first round of negotiations was held in Pakistan in early July but the talks collapsed after it became known Omar had been dead for two years.

“If the country is not under occupation, the problem of the Afghans can be resolved through intra-Afghan understanding. Any foreign pressure under the pretext of resolving the Afghan problem is not going to resolve the problem but will rather create other problems,” he said.

Many commanders were suspicious of the role of neighbouring Pakistan in hosting the talks. Pakistan and Afghanistan have separate but allied Taliban insurgencies and have long accused each other of not doing enough to stamp out Taliban bases on either side of the border.

Some Afghan Taliban feel that elements in the Pakistani security forces want to manipulate the Afghan insurgency for their own purposes. The Pakistanis say they are hosting the talks in good faith.