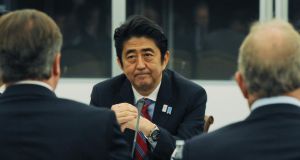 The prime minister of Japan, Shinzo Abe, having a meeting with British prime minister David Cameron at the G8 summit in the North. Photograph: Stefan Rousseau/PA Wire

A pick-up in exports and industrial output is supporting a steady economic recovery driven by the prime minister’s aggressive fiscal and monetary stimulus policies and a new growth initiative.

It is an upturn that is widely welcomed around the world, after years of Japanese economic lethargy, and many, Mr Abe included, believe it could also provide a badly needed fillip to the global economy.

Mr Abe’s post-G8 visit to Dublin today is the first by a Japanese head of government and is expected to focus largely on bilateral issues like trade.

The prime minister, who led the Liberal Democratic Party back to power in December, has proved a controversial figure, and not only economically. Critics complain that his identification with nationalist causes, among them the sanitising of Japan’s war record and territorial disputes with Korea and China, are straining the country’s relationship with regional neighbours.

How do you see the state of relations between Ireland and Japan, and are there opportunities to strengthen ties? There is, for example, no direct flight.
Since Ireland gained independence in 1922 no serving prime minister of Japan has ever visited this country. On this occasion, having been invited by the Taoiseach, Mr Kenny, it is an honour for me to be the first prime minister to visit Ireland.

Japan and Ireland may be geographically far apart, but I would like to mention a number of points we have in common.

First, we share common values such as freedom, democracy, human rights and the rule of law. Having these values in common, we can share responsibilities and co-operate in many areas such as education, science, and disarmament and non-proliferation.

Second, a hardworking nature. One example of this is Ireland’s tenacious efforts towards overcoming the European debt crisis.

Third, a rich culture. Famous Irish musicians such as U2 and Enya are well-known in Japan and have many fans.

It is certainly true that the level of human and economic exchange between our two countries is not absolutely satisfactory, and as you have mentioned there are as yet no direct flights.

However, having so much in common, our nations enjoy close ties of friendship, and I am confident that in particular our shared values and hardworking nature will be a driving force for growth that will also contribute to the global economy.

There is ample potential for the expansion of human and economic exchange, and the government of Japan will support this in a variety of ways. I hope that this visit will be an opportunity to inspire greater mutual interest between Japanese and Irish people, and to further strengthen the close ties between our two countries.

You have said “it is now time for Japan to become an engine of global economic growth”. As a result of the growth strategy announced recently do you think it will be possible for Japan to achieve sustainable growth?
Since I took office in December last year I have eliminated the entrenched deflationary mindset by introducing the first arrow of my strategy, a bold monetary policy, and I have reactivated Japan’s sluggish economy through a flexible fiscal policy, which is the second arrow.

The third arrow, formulated last week, is the growth strategy to promote private investment. By raising productivity we will increase national income, which will lead in turn to a positive cycle of growth.

We will revive the confidence of Japanese business and people and transform expectation into action.

Through this growth strategy we aim to introduce further regulatory reform, and by opening up infrastructure projects to the private sector we will harness the potential of this sector. At the same time, while maximising the potential of women and young people, we will develop internationally competent human resources, and we will achieve our growth strategy through the power of our combined efforts.

There has been a dramatic turnaround, from annualised GDP growth of minus 3.6 per cent in last year’s July to September quarter to plus 4.1 per cent in this year’s January to March quarter. As far as production, consumption and employment are concerned, it is clear that the real economy is reviving.

The most important thing is to implement the strategy for growth. We will not be shaken in our resolve to proceed with the measures leading to economic recovery.

Critics worry about your government’s real commitment to the expansion of foreign direct investment in Japan and to labour market reform. How do you view these challenges?
Since becoming prime minister I have stated that I want Japan to have “the world’s most business-friendly environment”. I want to make Japan into a country attracting technology, human resources and capital from all around the world.

In order to achieve this I will take bold steps to advance international economic partnerships, such as the Japan-EU EPA and the Trans-Pacific Partnership. In addition, in order to enable foreign businesspeople to work in Japan without worrying about their health or children’s education, I intend to introduce a system of special economic zones.

By doing so I aim to double foreign direct investment from the figure of JPY17.8 trillion at the end of 2012 to JPY35 trillion by 2020.

With regard to the labour market, the objectives of my administration are to promote the movement of labour from mature industries to growth industries without leading to unemployment, and to create a society where women and young people can actively participate in the workforce.

Many observers are concerned that nationalism could damage or even derail Japan’s hugely important ties with China and South Korea. Do you understand those concerns?
I would like to start by saying that if you consider that the Abe administration is engaging in loud displays of nationalism you are very much mistaken. With regard to historical issues, it is my fundamental belief that it is not up to politicians to make comments on such matters, but this should be left to historians, and I have no desire for issues arising from perceptions of history to become diplomatic or political issues.

The Republic of Korea and China are Japan’s most important neighbours. I would like to build our relationships while focusing on the future. South Korean president Park Geun-hye and Chinese president Xi Jinping are both new leaders, and the three of us belong to the same generation. I feel that communicating with these two leaders is vital to ensure the peace and stability of this region.

Additionally, when one considers North Korea’s provocative words and actions in the context of the regional situation in East Asia, co-operating with the Republic of Korea and China is indispensable.

While there may be problems, it would be a mistake to close the door on dialogue. On the contrary, because there are indeed problems it is all the more important for dialogue to take place between leaders. My door for dialogue is always open and I am ready for dialogue with both China and the Republic of Korea.