Air and sea search for a second boat is under way 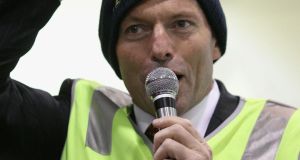 The issue of asylum-seeker boats is set to play a huge part in the Australian federal election on September 14th. Opposition Liberal party leader Tony Abbott has promised he will “stop the boats” if he wins power. Photograph: Ryan Pierse/Getty Images

Up to 55 people are feared dead after a suspected asylum-seeker boat sank near Christmas Island, off the northwest coast of Australia.

A massive air and sea search for a second boat is under way. As night fell, 13 bodies from the first boat had been located but not yet recovered from the water.

Australia’s home affairs minister Jason Clare said the search was continuing for survivors. He said the first vessel was first spotted on Wednesday and authorities had counted about 55 people on deck.

Most were men, but there were some women and children. “The vessel was stationary but did not appear to be in distress,” he said.

Call for assistance
Later that evening the Australian navy ship HMAS Warramunga was told to intercept the vessel, but could not locate it. On Friday, debris, including pieces of wood and life-jackets, was found 65 nautical miles northwest of Christmas Island.

The authorities received a call for assistance from another boat on Saturday night. The second boat reported engine troubles about 110 nautical miles north of Christmas Island and the Warramunga was redirected to its location.Mr Clare said that vessel has not yet been located.

The issue of asylum-seeker boats is set to play a huge part in the Australian federal election, which is being held on September 14th.

Opposition Liberal party leader Tony Abbott has promised he will “stop the boats” if he wins power, as he is widely expected to.

There were further asylum seeker arrivals yesterday afternoon, when 78 people rescued from a stricken vessel three days ago arrived at Christmas Island.