Argentina on the cusp of legalising abortion, a rarity in Latin America 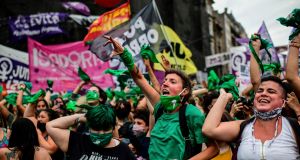 Demonstrators celebrate with green headscarves – the symbol of abortion rights activists – outside the Argentine Congress in Buenos Aires. Photograph: Ronaldo Schemidt/AFP via Getty

The Senate in Argentina will on Tuesday debate a Bill that, if it passes into law, would make the country by far the largest in Latin America to legalise abortion.

The proposed legislation would allow women to terminate pregnancies up until the 14th week. Currently abortion is allowed only in cases of rape and when there is a threat to the life of the mother.

Earlier this month the lower house of Congress approved the measure, which was a key campaign pledge of Peronist president Alberto Fernández, a Catholic. He says it is a question of social justice as abortion is already a reality in Argentina and the debate is between dangerous clandestine abortions and legal procedures carried out safely in public hospitals.

Health specialists estimate that up to half a million illegal abortions are performed in the country each year, resulting in 39,000 hospitalisations due to complications, the majority of which are poor women attending unsafe backstreet clinics.

A previous effort at decriminalisation fell short when the Senate narrowly voted against it in 2018. But now women’s rights groups say their national mobilisation behind the measure allied to the executive’s strong backing should get it over the line. “It will be pure suffering until the last minute but we are confident that this time it will pass,” says Julia Martino of the National Campaign for the Right to Legal, Safe and Free Abortion, which is co-ordinating the pro-choice campaign.

Martino says the Senate’s rejection of legalisation two years ago resulted in an intensified engagement by a new generation of women’s rights activists who have helped to keep the issue high up on the political agenda, meaning the government has pushed ahead with the proposal despite Argentina being one of the worst-affected countries in the world by the coronavirus pandemic.

The Bill, which could be voted on as early as Tuesday night, has caused divisions in many parties, and the result in the Senate is expected to be much closer than that in the lower house, where the measure was passed by 131 votes to 117. If the Senate is tied, the deciding vote will be cast by vice-president Cristina Kirchner. When she served two terms as president she was against decriminalisation, but she now says she supports the move.

Pro-choice senators have discussed making modifications to the Bill to garner more backing for it, which might require a new vote in the lower house before it can be signed into law. If the Bill does pass it would represent a major advance for pro-choice advocates in Latin America, where access to abortion is severely restricted. Currently elective abortion is legal only in Cuba, Guyana and Uruguay, as well as Mexico City.

Opposition to the proposal is being spearheaded by the country’s churches. Argentina’s Catholic bishops, whose leadership this year decided not to make their annual Christmas visit to the president, are intensively lobbying senators and the state governors who exercise political influence with them to vote against the Bill.

The health spokesman for the country’s bishops’ conference, auxiliary bishop of La Plata Alberto Bochatey, said the proposed law was not designed to help the poor but “comes from a bourgeois spirit which refuses to take responsibility for one’s actions”.

Pope Francis has also expressed his opposition to legalising abortion in his native country. In a handwritten letter sent last month to congresswoman Victoria Morales Gorleri, the head of a women’s network that focuses on preventing abortions in shanty towns, he wrote: “Is it fair to eliminate a human life to solve a problem? Is it right to hire a killer to solve a problem?”

But the Argentine pope has faced criticism in some conservative quarters for what has been described as his excessive discretion when criticising the government’s efforts to push through legalisation.

In a public letter, Catholic writer José Arturo Quarracino, the nephew of his predecessor as archbishop of Buenos Aires, criticised the pope for receiving Fernández in Rome at the start of the year even though he was publicly committed to decriminalising abortion. Quarracino described the Vatican’s resistance to the president’s project as “a gentle opposition, reaffirming its pro-life posture and ... nothing more.”

When asked about the pope’s likely reaction to any change in the law, Fernández said in a recent television interview “the Vatican is a state within a country called Italy where abortion has been permitted for years. So I hope he understands.”

Since becoming Latin America’s first pope in March 2013, Francis has sought to avoid being dragged into his country’s bitterly polarised politics. Though he receives a constant stream of Argentine politicians who visit the Vatican, he is yet to return to his home country as pontiff, despite visiting 10 other Latin-American nations, including all of his homeland’s immediate neighbours bar Uruguay.

In a video explaining why a mooted visit in 2017 would not take place, Pope Francis said he was too busy telling his compatriots “the world is bigger than Argentina”.