White farmers in Zimbabwe get $64m in state compensation

Robert Mugabe’s agrarian policy saw up to 4,000 farmers removed from their land 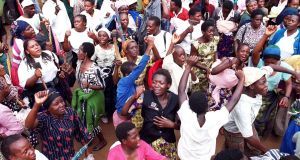 The land grabs were blamed for destroying Zimbabwe’s agriculture sector, a pillar of its economy, and ruining the southern African country’s relations with Western governments. Photograph: AP/Rob Cooper

Ninety-three white farmers whose land was expropriated in Zimbabwe during former president Robert Mugabe’s rule have received US$64.4 million (€57.7 million) in state compensation since 2009, the country’s finance minister has told state-run media.

On Wednesday the Herald newspaper quoted finance and economic development minister Mthuli Ncube as saying the government was committed to finalising compensation for all farmers affected by Mr Mugabe’s land reform programme, describing it as a “noble” idea.

Launched in 2000, Mr Mugabe’s controversial agrarian policy saw up to 4,000 white commercial farmers forcibly removed from their land over a 15-year period by mobs of ruling Zanu-PF party loyalists who claimed to be veterans of the 1970s independence war.

The land grabs were blamed for destroying Zimbabwe’s agriculture sector, a pillar of its economy, and ruining the southern African country’s relations with Western governments.

However, since Mr Mugabe was ousted from power in November 2017 his successor Emmerson Mnangagwa has promised to compensate the affected farmers for farmland improvements, and the infrastructure they installed, but not for the land itself.

Mr Mnangagwa’s decision to provide this limited compensation has proved controversial in Zimbabwe, as many believe the farmers should not receive anything, given the land was stolen from indigenous tribes by the country’s colonial rulers.

But Mr Mnangagwa believes resolving the issue of compensation is key to rebuilding Zimbabwe’s relationships with the West, which it needs to do to attract foreign investment and access loans to rebuild its crippled economy.

Mr Ncube went on to say the government had identified all farmers who still needed to be paid, and it was now involved “in a verification exercise to trigger disbursements” this year.

According to Zimbabwe’s Commercial Farmers Union (CFU), up to 1,000 of about 3,500 farmers seeking compensation will receive these payments from an estimated US$17 million the government has set aside in its 2019 national budget for the payouts.

Earlier this month CFU director Ben Gilpin told The Irish Times this year’s beneficiaries would be elderly farmers who were in financial distress. However, he stressed billions of dollars would be needed if all farmers were to be compensated properly.

Mr Ncube said the process of providing compensation involved the evaluation of assets to ascertain the extent of the government’s obligation to the affected farmers, owing to the magnitude of resources required.

“Government is also engaging development partners and other bilateral countries with the view to mobilising the requisite resources” that would facilitate the payments, he said in his ministerial update on the economy.