Whereabouts of Irish in Cairo unknown 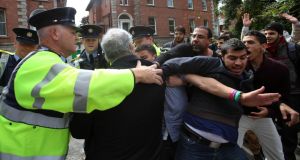 Pro-government supporters clash with friends of the Halawa family as they gather at the Egyptian embassy in Dublin yesterday. Photograph: Niall Carson/PA Wire 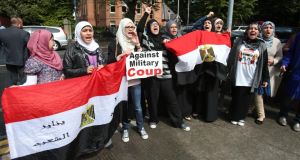 Friends of the Halawa family gather at the Egyptian embassy in Dublin demanding the release of the four Irish siblings detained by Egyptian authorities. Photograph: Niall Carson/PA Wire

The precise whereabouts and status of four Irish siblings detained after security forces stormed Cairo’s al-Fath mosque at the weekend remain unknown, with neither the family’s lawyer nor Irish diplomats granted access yesterday.

Irish diplomats in Cairo yesterday visited a number of security facilities, including Tora prison on the outskirts of the city, in an unsuccessful attempt to locate Omaima Halawa (21), her sisters Fatima (23) and Soumaya (27) and brother Ebraheem (17). “They were told the siblings were not there,” said a diplomatic source.

A Turkish diplomat said he had met the four siblings in Tora prison on Sunday evening while visiting a Turkish national also detained after the mosque siege. He said they were in good health and were being kept together.

The family’s lawyer in Cairo, Syed Abdul Alim, told The Irish Times that he and lawyers representing other detainees had been refused access to their clients. He said he believed the Halawas were being held in Tora prison. According to Mr Alim, an Egyptian prosecutor met with a number of detainees in the prison yesterday afternoon but he was unable to establish if his clients were among them. “At this point we don’t know if there are charges against the Halawas or not,” Mr Alim said.

Unable to contact family
Minister of State at the Department of Foreign Affairs Joe Costello had earlier welcomed the fact contact had been made with the Halawas through the Turkish diplomat. The siblings had been unable to contact their family since Saturday as their phones had been confiscated after they were detained.

“It’s good news that the Turkish diplomat spoke to them and it’s a relief to hear that they are in good form and that they have been kept together. That was a big concern, that they may have been separated,” Mr Costello said.

The Halawa family moved to Ireland 18 years ago. Their father, Sheikh Hussein Halawa, is imam at the Islamic Cultural Centre of Ireland, which is located in Clonskeagh, Dublin. The Halawa sisters were born in Egypt and their brother was born in Ireland. All are Irish citizens and, according to their family in Dublin, all travelled to Egypt on Irish passports.

The siblings were on their annual family holiday to Egypt when they decided to take part in protests against the military overthrow last month of Mohamed Morsi, Egypt’s first democratically elected president.

The Halawas joined demonstrations on Cairo’s Ramses Square on Friday, the day the Muslim Brotherhood called for rallies against the ousting of the Brotherhood’s Morsi and the deadly security operation last Wednesday to evict his supporters from protest camps in the city. Sheikh Halawa said he advised his children to seek refuge in the nearby al-Fath mosque after clashes that eventually claimed the lives of scores of people erupted in Ramses Square. Gunfights took place around the mosque as hundreds of Morsi supporters barricaded themselves inside. Security forces eventually overran the complex.

The siblings had also taken part in the weeks-long sit-in at Rabaa al-Adawiya, one of two encampments broken up by security forces last week with the loss of more than 600 lives.