US commits to finding peaceful solution to Egypt crisis 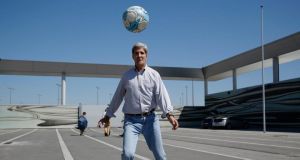 US secretary of state John Kerry participates in an impromptu game of soccer with staff as he waits for his plane to refuel at Vienna airport during a flight from Islamabad to London. In an interview with Pakistani media, Mr Kerry indicated support for Egypt’s new army leaders. Photograph: Jason Reed/Reuters.

The United States today said it would work with other nations to resolve Egypt’s crisis peacefully, injecting new energy into a push to end a bloody standoff since the overthrow of Islamist president Mohamed Morsi.

A day after saying the army had restored democracy by removing Mr Morsi, US secretary of state John Kerry urged Egyptian authorities to give demonstrators the space to protest in peace - a warning against dispersing pro-Morsi sit-ins.

“Egypt needs to get back to a new normal, it needs to restore stability, to be able to attract business and put people to work,” Mr Kerry said before a meeting United Arab Emirates foreign minister Sheikh Abdullah bin Zayed in London.

“We will work very, very hard together with others, in order to bring parties together to find a peaceful resolution that grows the democracy and respects the rights of everybody.”

This appeared to signal a new diplomatic effort to end the crisis in which more than 300 people have been killed since the army removed Morsi and his Muslim Brotherhood from power almost a month ago in response to mass protests against his rule.

Analysts say civilian members of the army-backed interim administration are trying to promote a political solution against the wishes of the security services which want to crack down hard on the Brotherhood.

Mohamed ElBaradei, vice president in the new administration, said he was lobbying for a peaceful outcome against others advocating crushing the Brotherhood.

“People are very angry with me because I am saying, ‘Let’s take time, let’s talk to them’. The mood right now is, ‘Let’s crush them, let’s not talk to them’, said Mr ElBaradei, pressing the Brotherhood to compromise. “I hope the Brotherhood understands that time is not on their side. I’m holding the fort, but I can’t hold it for very long.”

Egypt is more polarised than at any time since the downfall of autocratic president Hosni Mubarak in 2011, complicating mediation efforts in a pivotal Arab state fraught with unrest. In a possible attempt to ease tensions, Egyptian state TV reported that the interior ministry did not want to break up Brotherhood protests in Cairo by force.