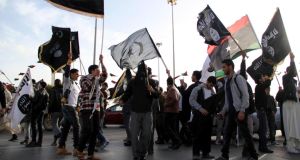 Benghazi, Libya's second biggest city, has seen frequent bouts of violence in recent months. Pictured are protesters demonstrating during a pro-federalism rally in the city earlier this month. Photograph: Reuters

Pro-government militiamen are suspected of having raped three British female activists of Pakistani origin in the eastern city of Benghazi, Libya’s deputy prime minister has said.

Awsad al-Barassi said the women were part of an overland aid convoy bound for Gaza. The women were travelling with two male companions when they were kidnapped on Tuesday on their way to Benghazi airport after deciding to return to Britain.

Mr Al-Barassi told Libya al-Hurra TV last night that he had met the women and they are in “very bad shape”.

The British foreign office said it is aware of an incident involving British nationals who were part of an aid convoy. It did not elaborate.

The overland convoy had left Britain on February 25th but was stuck for days along the Libyan-Egyptian border after Egyptian border guards refused to let them cross.

Mr al-Barassi told Libya al-Hurra TV that two of the women are sisters, and that their father had witnessed the rapes.

Their 10-vehicle convoy, carrying medical supplies, was named “Mavi Marmara” in honour of a ship involved in a 2010 deadly flotilla incident, according to Huseyin Oruc of IHH, a Turkish humanitarian relief organisation.

IHH was the group that helped organise the international flotilla that was attacked on May 31st, 2010.

Israeli commandos stormed the Mavi Marmara while stopping the flotilla that was trying to breach an Israeli blockade of Gaza. Eight Turks and a Turkish-American were killed, and dozens of activists and seven Israeli soldiers were wounded.

IHH mediated the release of the kidnapped women and men after they were contacted by the convoy’s organisers and asked for help. The man and his daughters are scheduled to return to Britain today, Mr al-Barassi said.

The women were attacked and robbed and their abductors included a taxi driver and a group of men in military uniforms, he added.

“A heinous crime has been committed against these female activists,” he said, adding that he hoped stern action would be taken against the attackers.

Libyan state news agency LANA quoted Interior Ministry spokesman Majdi al-Ourfi as saying four men had been arrested in connection with the incident. An army official said those arrested were believed to be former members of the security forces who were dismissed from their jobs a few months ago.

Benghazi, Libya's second biggest city, has seen frequent bouts of violence in recent months. In September, a deadly attack on the US mission resulted in the deaths of ambassador Christopher Stevens and three other Americans.