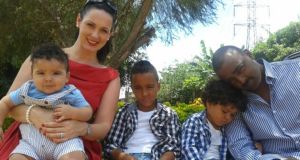 Ugandan entrepreneurs Cedric Babu and his wife Alison, from Northern Ireland, with their children in Kampala. Photograph: Mary Fitzgerald 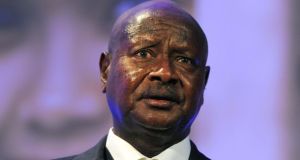 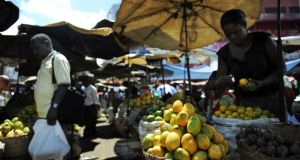 A vendor sells fruits and vegetables at Nakasero market in central Kampala. Uganda has benefited from being part of the East Africa common market which, since coming into force in 2010, has moved to do away with all barriers to trade between five countries: Kenya, Rwanda, Tanzania, Uganda and Burundi. Photograph: Tony Karumba/AFP/Getty Images 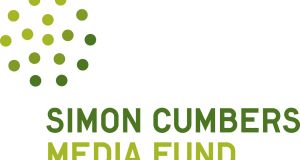 In many ways, Ugandan Cedric Babu and his wife Alison epitomise Africa’s new generation of entrepreneurs. They met while studying business in the US: Cedric was on a tennis scholarship and Alison on a scholarship from Northern Ireland.

After a stint living in Belfast, they returned to Uganda where Cedric set up Kinetic Management Group, a company that represents several leading sportspeople and music stars from across East Africa.

Alison opened the Amagara café bistro, a trendy hang-out in Kampala where young professionals meet for brunch at the weekend, and helped her mother-in-law to launch a natural skincare range that uses raw materials from Uganda.

Export market
Their social circle includes 30-something Ugandans working in the tech sector and communications, plus others helping to build the country’s export market. All are engaged in a constant conversation about how Uganda, and Africa generally, is changing and where it might be heading. Theirs is an optimistic vision of the future, but it is laced with pragmatism as to what can be achieved.

“There is a lot of buzz right now about how Africa is rising but I think we need a bit of a reality check,” says Cedric. “No one can deny things are changing but it depends on where you are standing. Many feel some of this talk has been exaggerated. Major challenges remain.”

Ugandan president Yoweri Museveni has big ambitions, claiming last June that the country over which he has presided for almost three decades will become a middle-income nation by 2017 and be classified as “first world” within 50 years.

Last year the Irish embassy in Kampala commissioned a study on Uganda’s burgeoning middle class and the potential economic opportunity it presents. The research identified “population and economic growth, tertiary education expansion, advancement in information and communications technology and innovation in financial services” as key drivers of the country’s expanding middle class.

The potential of this new middle class is huge,” Mr Museveni told The Irish Times. “They consume more, so consumption levels go up. Some of them are entrepreneurs. They have skills and look for opportunities to convert our natural assets into products for export. All of that fuels the economic growth rates we see today.”

Other view
Last August, however, Uganda’s central bank challenged Mr Museveni’s predictions, saying it would take two decades for the country to reach middle- income status based on current economic and population trends. The bank’s governor, Emmanuel Tumusiime-Mutebile, noted that while the minimum threshold for middle-income status is gross national income per capita of $1,036 (€760), Uganda’s level in 2011 was about half that at $510.

With the government aiming for annual economic growth of 7 per cent a year and the population increasing by 3.2 per cent, per capita income is estimated to be growing at 3.7 per cent, meaning it will take 19 years for Uganda to double its real income. The World Bank says Uganda may achieve middle-income status by 2040.

The Irish embassy study also sounded a note of caution, warning that the sustainability of Uganda’s middle class will depend on its government’s ability to “control population growth, improve productivity through investment in human resource development and addressing the problem of corruption, poor infrastructure and low savings”.

In the meantime, as is the case elsewhere in Africa, there is much discussion among Ugandans over what middle class actually means. A much-debated 2011 African Development Bank report, which defined middle class in Africa as those who spend between $2 and $20 per day, calculated that just 18.7 per cent of Uganda’s population (more than 6 million people) fell into this extremely broad category.

Misleading term
“Trying to define the middle class in Uganda is akin to defining the shape of the ever-flexible amoeba,” observed local journalist John K Abimanyi.

In another acerbic commentary, Ugandan writer Joachim Buwembo argued it was a very misleading term. “I think in East Africa middle class refers to the poor people between the dirt-poor majority and the rich few,” he wrote.

“In reality, our middle class are no middle class; they are simply fellows like me who have a second-hand car and almost nothing else. Many of us don’t have any economic base. In Texas, they would call us ‘Big Hat, No Cattle’! Get kicked out of the job and almost get a heart attack. No assets, no savings.”

Uganda has benefited from being part of the East Africa common market which, since coming into force in 2010, has moved to do away with all barriers to trade between five countries: Kenya, Rwanda, Tanzania, Uganda and Burundi.

African market
This integration of economies has prompted the growth of regional retail chains, particularly supermarkets, more affordable air fares and access to a wider range of consumer goods.

Of all the changes Alison has seen since arriving in Uganda more than a decade ago, she says the biggest is the shift in expectations as Ugandans find their place in a more globalised, inter-connected world through newly available technologies such as the mobile phone, internet and satellite TV.

“This has made Ugandans more aware of what they don’t have and what they want,” she says. “People are now living beyond their means. There is a stigma to being poor and people feel they must always keep up appearances even though they might not have enough money to buy bread or milk.

“Because of this, people spend their money on things that can be seen by others like a car, clothes or the school their children attend.” She has also noted how rising education levels mean more women are entering and staying in the work force. “A family’s net income is still very low but what has made a significant difference in terms of the disposable income of families in urban areas is that more women now work,” Alison says.

“More generally, you find people have their main day jobs plus a business or businesses on the side. These multiple lines of income all add up to more disposable income – though it is important to remember that the middle class in Uganda is still a very small percentage of the overall population.”