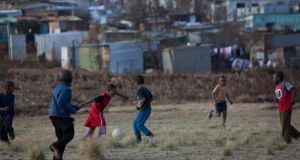 Children playing football in Soweto. What has changed for them since the end of apartheid? Photograph: AFP/Getty Images

He extolled it in that speech at the Rivonia trial in 1964 and he reiterated in that mesmerising speech at Cape Town on the day of his release from prison on February 11th, 1990. We should have known, or suspected, then the limits of Nelson Mandela’s agenda. Repeating his own words from 1964, he said: “I fought against white domination and I have fought against black domination. I have cherished the ideal of a democratic and free society in which all persons live together in harmony and with equal opportunities. It is an ideal which I hope to live for and to achieve. But if needs be, it is an ideal for which I am prepared to die”.

The “equal opportunities” lingo is the giveaway. It sounds progressive but in essence it is a commitment to a deeply unequal status quo, for without surrounding equality there can be no equal opportunity.

Had we paid attention to Mandela’s earlier career, we might also have divined this was no anti-capitalist revolutionary. The African National Congress’s “Freedom Charter”, drafted by a member of the South African Communist Party, Rusty Bernstein, was, according to Mandela in 1956, “by no means a blueprint for a socialist state”. While the charter called for the nationalisation of the banks, gold mines and land, Mandela insisted this did not involve the abandonment of capitalism. “The breaking up of these monopolies will open fresh fields for the development of a prosperous non-European business class.” He wanted “black capitalism” and that was a major part of his legacy.

Consolidation
The macro-economic fundamentals of the post-apartheid era were firmly established, mainly through the World Bank, before Mandela became president in 1994. An interim constitution guaranteed property rights, an independent central bank and a pledge to pay the debts of the departing regime. A 1993 loan from the IMF was conditional on the new government implementing public sector wage cuts and other cuts. Mandela, in office, consolidated that programme.

An IMF-approved nominee, Chris Liebenberg, formerly head of the country’s fourth largest bank, Netbank, was appointed minister for finance. Chris Stals, the central bank governor, was asked to stay on. Instead of nationalising the banks and mines, the government enticed the world’s top corporations to invest in South Africa. Barclays became the country’s largest bank and WalMart took a majority stake in the largest retail group.

The charisma of Mandela was used to embed the economic mindset of what is known as the Washington Consensus: fiscal discipline, deregulation, free markets and trade liberalisation, privatisation, low taxes, secure property rights. The consequences have been as follows: unemployment is at 25 per cent or 40 per cent if those who have opted out of the jobs market are included; South Africa is one of the most unequal countries in the world with a Gini coefficient score of 0.63, compared with 0.59 in 1993, before Mandela became president (a rating of zero would represent perfect equality with everyone paid the same, while one would be where one person has all the income); using the national poverty line of $43 a month (in current prices), 47 per cent of South Africans are poor, in 1994 it was 45.6 per cent.

Defenceless
The nature of the regime that Mandela bequeathed to South Africa was captured by the savagery of the police response to striking miners at the Marikana mine on August 16th, 2012. The police shot down 34 defenceless protesters in an eerie re-enactment of one of the worst atrocities of the apartheid era, the Sharpeville massacre of 1964 when 64 protesters were slaughtered.

One of Mandela’s closest comrades in the ANC, Cyril Ramaphosa, was on the board of the company that owned the mine and he had discussed with the police in advance the appropriate response to the striking miners. Ramaphosa, who was Mandela’s preferred successor as president of the ANC and of South Africa, is now one of the wealthiest people in South Africa.

On coming to the presidency, Mandela made a Faustian compromise: in return for the ending of institutionalised apartheid, he agreed to the continuance of economic apartheid. The “freedom” he brought to the mass of the black population was a chimera. The lives of at least half of the 61 million South Africans are hardly any better than before the ending of apartheid.

It is not that the ending of apartheid was not welcome as was the departure of the white supremacist regime. But the language of “freedom” and “liberation” is often misleading, especially when used to deflect attention from on-going subjugation and injustice. The prolonged celebration of his life, in part, is a feature of that spin. Not much of the infernal “writing” since his death has acknowledged how he changed so little.