Analysis: Right/far-right coalitions within realm of possibility in other EU countries 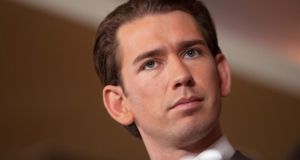 Austrian conservative Sebastian Kurz (31) feels he has a mandate for change in a continent destabilised by politicians twice his age. Photograph: Alex Halada/AFP/Getty Images

One thing is sure: he can expect a less chilly welcome to Brussels this week than his conservative predecessor Wolfgang Schüssel, who in 2000 teamed up with the populist Freedom Party (FPÖ), then headed by Jörg Haider.

With today’s EU battling an authoritian politicians in Hungary and Poland, Austria’s new right/far-right coalition is also within the realms of possibility in other western European capitals so outraged 17 years ago.

For now the key difference is that, while French and Dutch voters have only flirted with populists, a majority of Austrian voters have elected a conservative-populist alliance.

With an eye on history, Austria’s new coalition partners chose a historical venue to present their alliance: the Kahlenberg in Vienna’s 19th district is from where Polish King John III Sobieski drove back Turkish forces during the 1683 siege of Vienna.

Some four centuries later, the new Austrian coalition promises to be a bellwether in European politics, after promising voters it would crack down on immigration and its perceived threats to security, the welfare state and social peace.

That means interesting times loom with Germany, Austria’s bigger neighbour to the north.

In the refugee crisis, Kurz crossed Chancellor Angela Merkel by acting with its Balkan neighbours to close down a major route.

While she was furious at a perceived unilateral decision at odds with EU law, he hit back by saying its response to the German leader’s own unilateral action not to close borders had reduced asylum pressure in both countries.

It’s not just Europe that has changed. The last alliance between the Kurz party and the FPÖ collapsed due to the populists’ instability. This time around, political analysts say the FÜÖ is stable and determined to go the distance.

Only time will tell whether, by adopting a milder version of FPÖ policies to secure power, Kurz has beaten Austria’s far-right populists – or joined them.