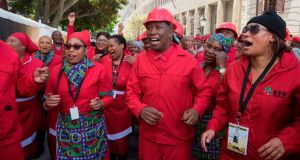 The African National Congress was not the only winner in South Africa’s sixth post-apartheid general election on May 8th, which resulted in the ruling party extending its 25-year hold on power for another five years, but with a reduced parliamentary majority.

As the dust settled on the vote-counting phase of a poll in which 17,671,616 legitimate ballots were cast, it became clear that some extreme nationalist and race-based parties had also come out of the poll smiling.

Placing third and fifth in the election respectively, the radical left-wing, pro-African Economic Freedom Fighters (EFF) and the mainly white Afrikaner Freedom Front Plus (FF+ Plus) made the most impressive gains with the electorate at national level.

In addition the mostly Zulu Inkatha Freedom Party (IFP) witnessed a resurgence in popularity in KwaZulu-Natal to become the official opposition in the province, after being decimated there by the ANC in the last two general elections.

The IFP now has the fourth-biggest representation of the 14 political parties that will make up South Africa’s parliament for the next five years.

The EFF, which is led by firebrand politician Julius Malema, registered the biggest increases in terms of new voters, with 10.75 per cent of those who cast their ballot backing the party this year compared with 6.35 per cent in 2014.

The party that is pushing for expropriation without compensation of white-owned land and the nationalisation of the mining and banking sectors is now the official opposition in three provinces: Mpumalanga, the North West and Limpopo.

While EFF growth had been predicted in most pre-poll voter surveys, the big surprise of the election was FF Plus.

The right-wing party, which wants to abolish black economic empowerment policies and protect minority rights, particular those of the Afrikaner, came from nowhere to secure 2.38 per cent of the national ballot compared with 0.9 per cent it achieved in 2014.

Indeed, the 2019 general election has turned out to be party’s best performance in a national poll since its inception in March 1994 to contest South Africa’s first post-apartheid all-inclusive ballot.

According to most analysts, the EFF and IFP growth is a result of former ANC voters’ disillusionment with the corruption-tainted ruling party. The ANC’s support this year fell five percentage points to 57.5 per cent of the vote from 62.5 per cent in 2014.

The FF Plus achieved its growth by attracting whites and a few communities of mixed-race voters who had previously voted DA, whose support fell from 22.2 per cent of the vote in 2014 to 20.76 per cent this year, according to both parties.

In short, the parties that espouse narrow ethnic forms of identity politics are on the rise at the expense of South Africa’s centrist parties, the ANC and DA, which aim to embrace broad-based party politics in their bid to appeal to voters in South Africa’s multicultural society.

In the 2014 election these race-based parties – in addition to a couple of small, faith-based parties – represented 10 per cent of South Africa’s voters, but in 2019 this had risen to 18 per cent.

“They are contrary to the ideals of the South African constitution, which sees South Africa as a melting pot of racial, linguistic and religious identities – unified in our diversity,” he wrote in the Daily Maverick recently.

Many analysts believe it was the ANC’s and DA’s political failings as much as it was the campaign strategies adopted by these small parties that paved the way for their electoral growth.

Despite new ANC president Cyril Rampahosa’s promise to clean up the ruling party and government if the former liberation movement was re-elected, hundreds of thousands of new voters and its traditional supporters could not bring themselves to continue backing it.

Factional infighting in the DA in the 18 months leading up to the May 8th poll also did little to convince the electorate it was capable of forming a government that could effectively represent all sections of South African society.

However, there is no doubt that polarising issues such as the expropriation of white-owned land without compensation drove voters on either side of the arguments into the arms of the smaller parties, which had more clearly defined positions on the subjects than the centrist parties.

At this stage it would be wrong to think the success of race-based parties in 2019 is a major threat to the non-racialist ideals that led to the formation of the new South Africa in 1994, given 78 per cent of voters still backed the ANC and DA.

But by the same token it would also be unwise to ignore their rise and the threat they pose to these ideals, which seek to build social cohesion and forge a national identity for all the people who live in the “Rainbow Nation”.