Almost 2,000 infected with Ebola in DRC as spread of disease accelerates

New cases reported at a rate of about 10 every day while some 1,346 people have died 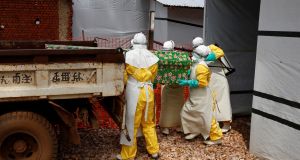 Health workers dressed in Ebola protective suits place a coffin containing the body of an Ebola patient to a truck at an Ebola treatment centre in the DRC. Photograph: Baz Ratner/Reuters

More than 2,000 people have been infected with Ebola in the Democratic Republic of the Congo (DRC), the health ministry has said, and aid agencies expressed concern over the accelerating spread of the disease.

So far there have been 1,914 confirmed and 94 probable cases of infection with the virus, making the outbreak, which was declared in August last year, the second largest in history. New cases are being reported at a rate of about 10 every day. Some 1,346 people have died.

It took 224 days for the landmark figure of 1,000 confirmed and probable cases to be reached. But it has taken only 71 days to reach 2,000 such cases.

“We are now seeing eight to 20 cases recorded each day, a number that is very likely an underestimate,” said Tariq Riebl, the emergency response director at the International Rescue Committee (IRC). “Just a few months ago, we were only seeing three to five cases a day. To see such a spike in cases at this stage in the outbreak means a drastic change is required. This response requires a total and complete reset.”

Violence by armed groups and community mistrust have severely undermined attempts to halt the epidemic, forcing health workers to suspend vaccination and treatment work. Last week, DRC’s military forces killed 26 rebels from one local militia in a clash near the city of Beni.

The acute insecurity has prevented vaccination teams from getting to some areas, while many people fear going to Ebola treatment centres, choosing instead to stay at home and risk transmitting the disease to carers and neighbours.

In some areas, health workers are afraid to wear protective equipment because they fear they will be targeted by armed groups, the World Health Organization has said.

“Community members do not trust medical staff and aid organisations, and are not coming into health facilities when they show Ebola symptoms,” said Mr Riebl. “In Butembo, the current epicentre of the outbreak, doctors and nurses are being threatened and health centres attacked regularly, hampering the response and forcing the IRC and other aid agencies to frequently suspend operations.”

“To say that things are not going well is an understatement. It’s time the international community wakes up to the severity of this crisis,” said Mr Riebl.

Though a decline in the number of new confirmed Ebola virus disease cases was reported last week, experts said the figures should be interpreted with caution given the complex operating environment and fragility of the security situation.

The UN has been urged by charities to ramp up Ebola prevention work in DRC to the highest level of emergency response.

Only three crises - Yemen, Syria and Mozambique - are treated as the equivalent of a level-three response, activated when agencies are unable to meet needs on the ground.

“This outbreak is potentially devastating for the region,” he said. “It could spread easily to neighbouring provinces and even to neighbouring countries. We need more people on the ground to help coordinate efforts to contain this deadly disease. We need to act fast, and we need to act generously.”

Last month, the UN announced several measures to strengthen its response, including the appointment of a new emergency co-ordinator, David Gressly.

Aid agencies, infectious disease experts and the WHO say it will be very hard to bring this outbreak under control, even though they have had vaccines and experimental drugs from the outset.

There is almost no functioning state in much of eastern DRC and an almost total lack of basic services such as power, education, roads or healthcare. The authority of the government only extends to the edges of urban areas.–Guardian