Sign language interpreter claims he was hallucinating on stage 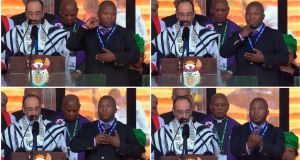 A South African sign language interpreter accused of gesticulating gibberish as world leaders paid tribute to Nelson Mandela defended himself as a “champion” signer today, but said he suffered a schizophrenic episode during the event.

The interpreter, identified as 34-year-old Thamsanqa Jantjie, told Johannesburg’s Star newspaper he started hearing voices and hallucinating while on stage, resulting in gestures that made no sense to outraged deaf people around the world.

“There was nothing I could do. I was alone in a very dangerous situation. I tried to control myself and not show the world what was going on. I am very sorry. It’s the situation I found myself in,” he told the paper.

He did not know what triggered the attack, he added, saying he took medication for his schizophrenia. Millions of TV viewers saw Jantjie interpreting for leaders including US president Barack Obama and his South African counterpart, Jacob Zuma, at Tuesday’s Mandela memorial.

Afterwards South Africa’s leading deaf association denounced Jantjie as a fake, saying he was inventing signs. However, in a radio interview Jantjie said he was happy with his performance at the memorial to the anti-apartheid hero, who died a week ago aged 95.

“Absolutely, absolutely. I think that I’ve been a champion of sign language,” he told Talk Radio 702. When contacted by Reuters he said he could not understand why people were complaining now rather than during other performances. “I’m not a failure. I deliver,” he said, before hanging up.

The controversy has overshadowed South Africa’s 10-day farewell to Mandela, whose remains were lying in state for a second day on Thursday at Pretoria’s Union Buildings, where he was sworn in as the nation’s first black president in 1994.

Revelations about Mr Jantjie’s unconventional gestures - experts said he did not know even basic signs such as ‘thank you’ or ‘Mandela’ - sparked a hunt for the mystery mimer on Wednesday.

The government, which was in charge of the mass memorial, said it had no idea who he was, a comment echoed by the ruling African National Congress (ANC), even though footage from two large ANC events last year showed him signing on stage next to Zuma.

Mr Jantjie said he worked for a company called SA Interpreters hired by the ANC for Tuesday’s ceremony at Johannesburg’s 95,000-seat Soccer City stadium. “Absolutely. That’s what happened,” he told the radio. The ANC denied any knowledge of Jantjie, but said it was investigating. “I’m very, very surprised,” spokesman Jackson Mthembu said. “We will follow this up. We are not sure if there is any truth in what has been said.”

The death of Nobel peace laureate Mandela triggered an outpouring of grief and emotion - as well as celebration and thanksgiving - among his 53 million countrymen and millions more around the world. His body will lie in state for a third day tomorrow before being flown to the Eastern Cape, where it will be buried on Sunday at his ancestral home in Qunu, 700km south of Johannesburg.

Thousands of mourners continue to queue to say goodbye to Mandela in Pretoria in the building where the anti-apartheid hero was inaugurated in 1994 as South Africa’s first black president.