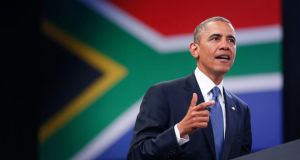 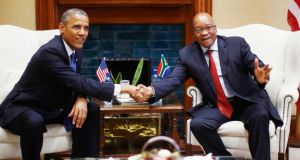 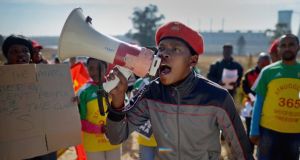 The 94-year-old anti-apartheid hero has been in hospital for three weeks for treatment for a recurring lung infection.

Mr Mandela’s condition remains “critical but stable” but the government hopes he will be out of hospital soon, president Jacob Zuma said.

Mr Obama, in South Africa on the second leg of a three-nation Africa tour, met Mandela relatives to deliver a message of support instead of directly visiting the former president at the hospital where he has spent the last three weeks. The meeting took place at the Nelson Mandela Centre of Memory in Johannesburg.

But Mr Obama also faced protests by South Africans against US foreign policy, especially American drone strikes. Police fired stun grenades to disperse several hundred protesters who had gathered outside the Soweto campus of the University of Johannesburg, where Mr Obama addressed an afternoon town hall meeting with students.

The brief confrontation some distance away did not disrupt the event in the heavily protected campus, where Mr Obama gave a speech praising what he called a new “more prosperous, more confident” Africa. He also took questions from students.

Mr Obama told reporters after his visit with Mr Mandela’s family that he also spoke by telephone with Mandela’s wife Graca Machel, who remained by her husband’s side in the hospital in Pretoria.

“I expressed my hope that Madiba draws peace and comfort from the time that he is spending with loved ones, and also expressed my heartfelt support for the entire family as they work through this difficult time,” he said, using the clan name Madiba by which Mandela is affectionately known.

Mr Obama paid tribute to ailing former South African leader today as an inspiration to himself and to the world.

The transition to freedom and democracy in South Africa continues to shine as a beacon, he said.

Speaking in Pretoria as part of his week-long visit to Africa, Mr Obama said: “My thoughts and those of Americans and people all around the world are with Nelson Mandela and his family, and all South Africans.

“The struggle here, against apartheid, for freedom, Madiba’s (Mr Mandela’s) moral courage, this country’s historic transition to a free and democratic nation, has been a personal inspiration to me, it has been an inspiration to the world, and it continues to be, in so many regions that are divided by conflict, sectarian disputes, religious or ethnic wars, to see what happened in South Africa, the power of principle, and people standing up for what’s right, I think continues to shine as a beacon.”

Mr Obama told reporters on the flight to South Africa yesterday that he was grateful that he, his wife and daughters had had a chance to meet Mr Mandela previously.

A photo of his introduction to Mr Mandela in 2005 hangs in his personal office at the White House - their only meeting, when Mr Obama was a senator.

“I don’t need a photo op,” he said. “The last thing I want to do is to be in any way obtrusive at a time when the family is concerned about Nelson Mandela’s condition.”

The US president has said the imprisoned activist’s willingness to risk his life for the cause of equal rights helped inspire his own political activism.

The US leader will also pay tribute to the fight against apartheid by visiting the Soweto area and meeting students at the University of Johannesburg. At least 176 young people were killed in Soweto township 27 years ago this month during a youth protest against the apartheid regime’s ban against teaching local Bantu languages.

The Soweto Uprising catalysed international support against apartheid, and June is now recognised as Youth Month in South Africa. The university plans to bestow an honourary law degree on the US president.