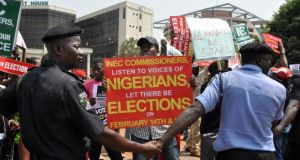 Nigeria’s decision to postpone elections for six weeks because of spreading attacks by the Islamist militant group Boko Haram in the northeast is a “setback” for democracy, the main opposition party said.

Independent National Electoral commission chairman Attahiru Jega has said the presidential and legislative elections will be pushed back from February 14th to March 28th, followed by state gubernatorial and legislative votes on April 11th. The commission took the decision after the security forces said they would re-establish “normalcy” in six weeks, he said.

The All Progressives Congress party, which is fielding Muhammadu Buhari as its presidential candidate, described the decision as “clearly a major setback for Nigerian democracy” and “highly provocative”, according to a statement yesterday from party chairman John Odigie-Oyegun. US secretary of state John Kerry said he was “deeply disappointed”.

The election pits the ruling People’s Democratic Party of President Goodluck Jonathan (57) against a united opposition led by former military ruler Mr Buhari (72) in what analysts expect will be the tightest contest since the PDP came to power in 1999. The delay will help officials distribute biometric cards to the almost 70 million registered voters, Mr Jega said.

“Delaying the election does aid the PDP and President Goodluck Jonathan,” said Ryan Cummings, the Cape Town-based chief Africa strategist at security company Red24 plc. “It derails the political momentum which Buhari and the APC has recently gathered and will also leave the opposition with limited funding to campaign for another six weeks.”

Boko Haram, which roughly translates as “western education is a sin” in the Hausa language, has been seeking for the past six years to establish Islamic law in Africa’s biggest oil producer. The group killed more than 4,700 people last year.

Mr Jega said the office of Nigeria’s national security adviser told him “security could not be guaranteed during the proposed period in February”, especially in the northeastern states of Borno, Adamawa, Gombe and Yobe. “What else can we do? We believe them,” he said. “I know there are sufficient grounds for cynicism, but let’s keep hope alive.”

A PDP spokesman said, “The postponement neither confers advantage on our party and our candidates, nor can it ever be described as a setback to our democracy.”

The spiralling violence and a 50 per cent decline in prices for oil are tempering investor appetite for an economy that has expanded more than 5 per cent annually over the past four years.

Mr Kerry, in an emailed statement, urged the government to ensure there were no further delays: “It is critical that the government not use security concerns as a pretext for impeding the democratic process.”

With no success so far in halting Boko Haram attacks, there’s little evidence the security forces can now accomplish this in six weeks, said Jibrin Ibrahim, director of the Abuja-based Centre for Democracy and Development. “They could seek another postponement because they might not solve it,” he said. “The implication is that we may not have an election. It is a coup by the military.”

Boko Haram attacked border towns inside Niger last week, days after raiding the town of Fotokol in Cameroon. The raids followed an offensive by troops from Chad backed by their air force to drive Boko Haram out of towns it holds in northeastern Nigeria as part of its self-declared caliphate. Before the Chadian army’s intervention, the group controlled territory the size of Belgium, according to Verisk Maplecroft.

African Union officials have agreed to create a regional force to fight the group. More than one million Nigerians have fled their homes.

Mr Buhari called for calm and cautioned against any violence following postponement of elections. Foreign powers have voiced concerns that there could be a repetition of violence that followed 2011 elections, when 800 people died. – (Reuters/Bloomberg)