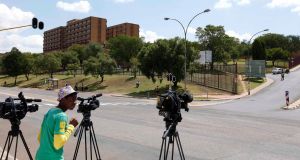 Members of the media are seen outside the One Military Hospital, which former South African President Nelson Mandela was previously admitted into, in Pretoria. Photograph :Siphiwe Sibeko/Reuters

South African former President Nelson Mandela is in good spirits and making progress, doctors said today after the 94-year-old anti-apartheid hero was taken to hospital for the third time in four months for a lung infection.

The medical report was a relief to South Africans who had been anxiously praying and waiting for an update on the health of the Nobel Peace Prize laureate, hospitalised before midnight on Wednesday. Global leaders sent their best wishes.

"President Nelson Mandela is in good spirits and enjoyed a full breakfast this morning," Mr Zuma's office said in a statement.

"The doctors report that he is making steady progress. He remains under treatment and observation in hospital," it added.

A former lawyer, he is revered at home and abroad for leading the struggle against white minority rule - including spending 27 years in prison on Robben Island - and then promoting the cause of racial reconciliation.

In churches across South Africa, many included Mr Mandela in their prayers on Good Friday, one of the most important days in the Christian calendar.

At the Regina Mundi Catholic Church in the Soweto township outside Johannesburg where Mr Mandela once lived, churchgoers lit candles for him. "He's an icon today and we are free because of him," parishioner Oupa Radebe said.

"I hope this time God will have mercy on him to give him the strength and courage to continue to be an icon for our country," Father Benedict Mahlangu said at the service.

"When you think of a single individual that embodies the kind of leadership qualities that I think we all aspire to, the first name that comes up is Nelson Mandela. And so we wish him all the very best," he said.

Mr Mandela's fragile health has been a concern for years as he has withdrawn from the public eye and mostly stayed at his affluent homes in Johannesburg and in Qunu, the rural village in the destitute Eastern Cape province near where he was born.

President Zuma has urged the nation to remain calm.

"Of course I have been saying to people, you should bear in mind Madiba is no longer that young and if he goes for check-ups every now and again, I don't think people must be alarmed about it," Mr Zuma told the BBC on Thursday.

"In Zulu, when someone passes away who is very old, people say he or she has 'gone home'. I think those are some of the things we should be thinking about."

Madiba is the clan name by which many South Africans refer to Mr Mandela, whose face adorns the country's new bank notes.

Despite his absence from the political scene for the past decade, he remains an enduring and beloved symbol of the struggle against racism.

"He's like a father to me ... There is no more apartheid, black and white can go to the same places," said Princess Nopuhle, a student, aged 18, in Johannesburg's Mandela Square.

As he has receded from public life, critics say his ruling African National Congress (ANC) has lost the moral compass he bequeathed it when he stepped down as president in 1999.

Under such leaders as Mandela, Walter Sisulu and Oliver Tambo, the ANC gained wide international respect when it battled white rule.