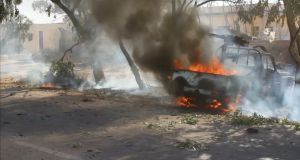 A vehicle burns as forces aligned with Libya’s new unity government advance on the eastern and southern outskirts of the Islamic State stronghold of Sirte, in a still image taken from video on June 9th, 2016. Photograph: Reuters TV

Islamic State (Isis) militants are retreating from their main bastion in Libya, as militiamen allied to a UN-brokered government pushed into the central city of Sirte, officials said.

Some militants reportedly shaved off their beards to escape while the pro-government fighters, mostly from the western Libyan city of Misrata, pushed into the city centre in tanks and pick-up trucks mounted with machine guns.

At a main roundabout, the militiamen dismantled the metal frame of what some Sirte residents had dubbed the “stage of horror” - a podium used by Isis for public beheadings and extrajudicial killings during its reign of terror.

Videos circulated on social media show triumphant militiamen flashing victory signs and chanting “Allahu-Akbar” or “God is Great” as they drive around Sirte.

The capture of Sirte capped a month-long offensive by the Libyan militiamen to take the Isis stronghold - it was the only major Isis-held city outside Syria and Iraq, and was seen as a possible fallback option for the capital of its self-styled caliphate.

Isis extremists are struggling to fend off advances on a number of fronts, including in the Iraqi city of Falluja and the northern Syrian provinces of Aleppo and Raqqa.

In Libya, militiamen from the western city of Misrata have been the main fighting force for the UN-brokered unity government that was installed in Tripoli earlier this year. For nearly four weeks, the militiamen have been advancing from the west and south against Isis.

The extremist group dispatched suicide bombers against the militiamen, who lost dozens of fighters last month.

On Wednesday, the militias pushed deeper into Sirte, which lies in the central part of Libya’s Mediterranean coastline. On Thursday, they reached the city’s key Zafarana roundabout, where they dismantled the stage where Human Rights Watch says Isis killed at least 49 people.

Misrata-based media official Ahmed Hadiya said his forces found sinks full of shaved-off beards and long hair inside a Sirte school taken from Isis, suggesting militants had sought to get rid of their trademark looks before fleeing.

Left behind were also militant cell phones, Isis paraphernalia and leaflets pledging allegiance to Isis leader Abu Bakr al-Baghdadi, according to a Misrata resident who shared photos he took of the items with The Associated Press.

A militia commander, Ali bin Gharbiya, claimed in an audio message posted on Facebook that the victory against Isis militants in Sirte happened quickly. “Except for a little bit of anti-aircraft fire, they immediately withdrew,” he says.

The centre was the late Libyan dictator Muammar Gadafy’s one-time favourite conference hall where he hosted lavish African and Arab summits. Isis had turned it into its headquarters and held graduation ceremonies there for those who completed Isis-organised courses.

“The Daesh are cornered inside and around the centre,” Mr Hadiya said, using the Arabic language acronym for the Islamic State group. “Our forces are preparing... to seize the centre.”

Isis militants unexpectedly showed little resistance once the militiamen pushed into their bastion. This could signal either a tactical retreat or a reflection of the small number of Isis fighters remaining in the city - after Western officials earlier estimated Isis strength in Sirte to be over 5,000 men.

Isis and other extremists have exploited the chaos that followed the 2011 overthrow of Gadafy in a Nato-backed uprising, establishing strongholds just across the Mediterranean Sea from Europe.

Libya meanwhile sank deeper into turmoil, with the country’s feuding factions splitting it into two parliaments and rival governments.

This year, Western nations have thrown their support behind the UN-backed government in hopes of ending the rivalry between authorities based in the capital, Tripoli, and in the country’s far east.

According to Ziad Hadia, who represents Sirte in the parliament based in eastern Libya, more than 2,000 Isis fighters are thought to remain in the city. Foreign fighters, mostly from Tunisia and sub-Saharan Africa, account for more than 85 per cent of the fighters, he added.

The Western-backed unity government, in the absence of an organised and unified army, has depended on the Misrata militias, among the country’s most powerful.

Meanwhile, another force that answers to army leader Khalifa Hifter, based in the country’s east, has announced it has deployed fighters south of Sirte.

A third armed group, which has declared its loyalty to the UN-backed government, on Thursday took the town of Hawara, east of Sirte, from Isis. The group has also taken other small towns located between Sirte and an oil-rich area in eastern Libya in recent weeks.

Hifter has also been battling Islamic militias in the eastern city of Benghazi and the former Isis stronghold of Darna, where his forces have carried out airstrikes.

On Thursday, four civilians were killed, including three children, when an air strike hit a storehouse in a crowded area of Darna, according to city politician Hamid Al-Bandag.

Mr Hadiya said the assault on Sirte has cost the Misrata militiamen the lives of 130 fighters and that about 400 have been wounded. Among the fatalities were two former government ministers who took up arms to battle Isis, Mohammed Sawalem and Abdel-Rahman al-Kissa.

Before he was killed in Sirte, al-Kissa said on his Facebook page that fighting Isis was a “gift from God... this is a sacred war”.