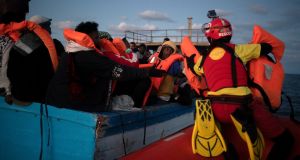 Migrants, most of them from Eritrea, are assisted by aid workers of the Spanish NGO Open Arms, after being located sailing adrift on an overcrowded wooden boat in the Mediterranean sea, about 85 miles north of Libya, on Thursday. Photograph: Joan Mateu/AP Photo

Mahdi spent most of this year pleading for urgent evacuation from Libya so his daughter’s life could be saved.

The little girl, Mahjah, was just 17 months old when she died from cancer last month. She used to sing hymns to her father in hospital, as he carried her around on his shoulder, trying to distract her from the pain.

“She tried hard and wanted to live, but fate was stronger,” Mahdi says.

Mahjah needed a bone marrow transplant, which wasn’t available in Libya. Refugee resettlement and emergency evacuations – already extremely limited and slow – stopped completely when the pandemic began. Mahjah was one of many who suffered the consequences.

Mahdi, a 43-year-old from Sudan, has lived in Libya since 2015, after fleeing tribal conflict in Darfur.

Like tens of thousands of other refugees and asylum seekers, he is stuck in a country with militia rule, few opportunities, and regular outbreaks of violence – unable to go back to Sudan, because of the danger he would be in, and without the resources to find another route to safety.

Last March, Mahdi applied to the UN refugee agency (UNHCR), asking for help and medical evacuation for his daughter, but nothing happened.

UNHCR spokeswoman Caroline Gluck said they have been aware of the case but there were no facilities in Libya for bone marrow transplants. She said the UNHCR was advocating for more resettlement places and humanitarian visas for people with serious medical needs, but few countries would accept them. There were at least 11 other sick people in the same situation, some of whom were young children.

“It should also be emphasised that humanitarian flights out of Libya have only recently resumed, due to the Covid-19 pandemic and the closure of global borders,” she said.

As Mahjah’s condition deteriorated, Mahdi would lock his two other children – aged six and four – in the shelter they rented during the day, in a desperate attempt to keep them safe. He went to look for work, so he could earn enough to buy them food and pay for the baby’s medication and scans. “I know very well that this was a terrible mistake, but I had no choice,” he says.

The pandemic has reduced international attention towards Libya, which continues to be the site of a massive humanitarian crisis, where refugees are trapped in a cycle of suffering, abuse and exploitation. Since 2017, the European Union has been supporting the Libyan coastguard to intercept boats of people trying to cross the Mediterranean Sea to Europe. Tens of thousands have been caught this way and forced to return to Libya, often to indefinite detention.

That policy continues: by December 16th, nearly 11,000 people had been intercepted and returned. Only 655 had been legally evacuated.

“2020 has been one of the most challenging years for migrants in Libya,” said Safa Msehli, a spokeswoman for the International Organisation for Migration.

“Hostilities which continued for most of the year, intensified and threatened lives. The humanitarian situation further deteriorated, and thousands continued to attempt the Mediterranean crossing. The intolerable loss of life on land and at sea also continued,” she said.

“Many migrants live in crowded and often unsanitary conditions in the country, with very little – if any – access to health[care]. Those in detention also face heightened risk due to the pandemic, which, when combined with such dire conditions, create a disastrous living situation.”

Among those affected by the halt on evacuations were more than 2,700 refugees and migrants in government-associated detention centres. Last month, about 50 risked gunfire from guards and the threat of kidnapping on the road outside, escaping from a detention centre in Zintan, in Libya’s Nafusa mountains. Some of them had been locked up there for more than two years.

Dozens of detainees perished in Zintan in the intervening years, including several teenagers and a young boy, who died from appendicitis. Others suffered from tuberculosis, medical neglect, heatstroke, and smoke from a fire, which broke out inside a hall they were held in.

The UNHCR stopped visiting the detention centre in early 2020, citing access problems, which led to increased desperation among Zintan’s refugees and migrants. “What can we do now?” one of those still locked up there asked The Irish Times in recent days, through WhatsApp messages. “We just need help. Please help us.”

For refugees who escape or are released in the cities, there are also few options. “The problem is now renting a house, and money to pay for houses and for food,” said one of Zintan’s escapees. “[And] our security is in danger.”

While there are hotlines they can call to ask for medical help and other assistance, they complain that the phone is rarely answered, and it is difficult to get an appointment with the UNHCR to discuss evacuation.

“I’m destroyed physically and mentally thinking about [when] will they call me, what the result will be, how can I stay strong until that time?” said one man who has sought assistance.

Mahdi is still hoping the rest of his family can be saved. He says his wife cries all the time and won’t eat. His two remaining children are disturbed, waking up constantly during the night, or talking and walking in their sleep.

“I suffered so much here that I got a bitter taste in my throat of abuse and neglect. I lost a member of my family and fear for the lives of the rest,” he adds. “I am devastated.”

If he manages to raise enough money, he says, “I’ll have to cross the sea with what’s left of my family to save them from the risk of dying here.”