Bernardo Jofrisse fought the colonial Portugese in the idyllic Gorongosa, where he is now a conservationist 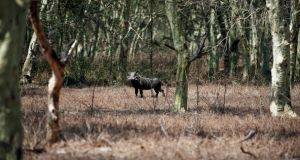 A warthog stands among trees in the Gorongosa National Park, Mozambique

Bernardo Beca Jofrisse is a trim 65-year-old with a military bearing and a reserved but gently courteous manner. Surprisingly gentle, perhaps, considering the things he must have seen in his lifetime.

I met him in the idyllic setting of the Chitengo camp in Gorongosa National Park, Mozambique. But when Jofrisse first encountered this remarkable landscape it was a very different, devastated place.

He was called up for military service in the Portuguese colonial army in 1969. He says he decided instead to join an army that was fighting to free his country, and not the one that was oppressing it.

So he slipped across the border to Tanzania, and joined Frelimo – the leftist Mozambique National Liberation Front. From there he was sent to the Soviet Union, where he was trained in reconnaissance and explosives. At the time, Nato was supporting Portugal in its brutal suppression of the independence movement; only the eastern bloc offered the rebels any support.

Fronts in Tete
By 1971, much of northern Mozambique was controlled by Frelimo. Jofrisse returned to the central province of Tete, where he helped launch new fronts against the Portuguese. “This was a very important moment in the war,” he says. “We had 4,000 fighters in Tete. I took part in many battles, along with my comrades.”

By 1974, Frelimo, and the MPLA in Angola, had inflicted severe losses on Portugal’s largely conscripted armed forces. The increasingly unpopular war was a key factor in propelling a group of officers to overthrow the dictatorship in Lisbon in the “carnation revolution”, 40 years ago last month. Mozambique became independent within months.

“We had not expected victory to come so soon,” says Jofrisse, though Frelimo had been fighting for 15 years. Nor could they have quite expected what followed, though he says they knew that they still had many enemies closer to home.

Apartheid South Africa and white Rhodesia did not want a leftist state with an enfranchised black majority on their borders. They financed and trained a rebel group, Renamo, plunging the young nation almost immediately into a devastating civil war that lasted until a peace deal in 1992. Jofrisse was director of weaponry for Frelimo during those terrible years, in which a million people died.

Today he forms half of the oversight committee for Gorongosa National Park, an area roughly the size of Wicklow and Wexford, which saw some of the worst fighting with Renamo. Gorongosa had been world famous in the 1960s for its large herds of buffalo, antelope and elephant. By 1992 most its big mammals had been slaughtered for food by the civil war combatants. In the hungry years that followed, poachers pushed several species towards extinction.

This wave of destruction began to reverse only when Greg Carr, a US philanthropist and human rights activist, committed $60 million to assist in the restoration of the park, in an innovative 20-year partnership with the Mozambique government. Carr forms the other half of the oversight committee.

Jofrisse describes Carr’s contribution as “heroic” and believes the park now has a strong structure and good social strategies in place to ensure local communities benefit from it, greatly reducing poaching. He is also confident the recent sporadic resurgence of conflict between Renamo and government forces in the region will soon be resolved.

“Conservation?” he says. “I’ll tell you how I learned about conservation. During the war of independence the Portuguese had almost finished the Cahora Bassa dam on the Zambezi. We didn’t want them to finish it and be able to use it against us. So we sabotaged their supply lines but we never destroyed the dam itself, because we knew we would need it after independence. That was my introduction to conservation.”

It’s an unusual analogy, but it makes some sense. Jofrisse sees Gorongosa as “a real treasure, an example to the other parks in Africa today.” He is proud the great biologist EO Wilson has brought world-class scientific expertise to the park. “That is the guarantee of our biodiversity”.

The park is again becoming a great reservoir of ecological riches. It will be a huge challenge for this very poor country to maintain it but a much happier one than its recent history promised.