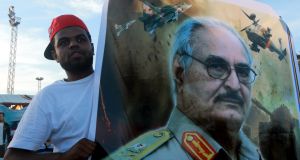 At least 16 people have been killed in heavy fighting in the Libyan city of Benghazi between forces allied with the official government and Islamic State fighters, a military commander said on Wednesday.

Benghazi, caught up in fighting for more than a year, is just one front in Libya’s multi-sided war involving two competing governments - an official one in the east and a self-declared one controlling Tripoli - and the loose coalitions of armed factions backing them.

“Our special forces are making progress and have recaptured the air defence camp between Mash’hash and Sidi Faraj districts. The camp was captured last year by Islamic State,” he said.

Haftar declared war on Islamist fighters in Benghazi more than a year ago and he was later named commander in chief for the official government, but his campaign has failed to sweep out militants from the city.

Both sides have alternately held the upper hand in the fighting. Islamic State fighters are also increasingly in the battle, including foreign jihadists.

The two competing governments have forces loyal to them but these often answer to regional, tribal or local commanders first.