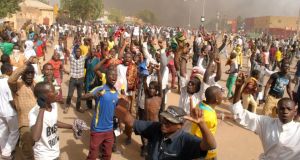 Thousands of protesters gather after Friday prayers to protest at the depiction of the prophet Mohammed in the latest edition of the French satirical weekly, Charlie Hebdo. Photograph: AFP/Getty Images

Four people have been killed in protests turned violent in Niger, after French satirical magazine Charlie Hebdo published more cartoon images of the prophet Mohammad a week after Islamist gunmen shot dead 12 people at its offices in Paris.

The Niger government said four were killed as police clashed with a crowd that attacked a French cultural centre and set churches ablaze.

Protesters in the poor West African country’s second-largest city of Zinder in the south set French flags ablaze and attacked Christian shops with clubs and Molotov cocktails, while police responded with tear gas.

Three civilians died, including two who were shot by police during an attack on their station, interior minister Hassoumi Massaoudou said on state television.

A police officer was run over and killed, while 45 other people sustained injuries.

“I would like to reassure Christians that the state is here to defend those living in Niger at all costs,” he said.

Witnesses said the crowd of mostly youths ransacked the French cultural centre as well as the homes of police officers and the local headquarters of President Mahamadou Issoufou’s party.

“The protesters are crying out in local Hausa language: ‘Charlie is Satan - let hell engulf those supporting Charlie’,” said Aboubacar Mamane, a shopkeeper, by telephone.

The streets were calmer by nightfall, residents said. As a precaution, the government forbid a Saturday sermon on the prophet at the main mosque in the capital Niamey.

Charlie Hebdo’s first edition since the attack, published on Wednesday, featured a cartoon of the Prophet on a cover that defenders praised as art but critics saw as a new provocation.

In Pakistan, police fired tear gas and water cannon at about 200 protesters outside the French consulate in the southern port city of Karachi.

In Algeria, police clashed with demonstrators in Algiers after rioting broke out at the end of a protest against the publication of the French cartoons. Several officers were injured as small groups of protesters hurled rocks, fireworks and bottles at security forces around the waterfront area of the Algerian capital.

In Niger, demonstrators said they were angered by the latest front cover of Charlie Hebdo this week, which despite the Paris killings again featured a cartoon of Mohammad.

“Charlie Hebdo in the toilets,” said one placard held by a protester at a march in the Mauritanian capital Nouakchott.

The presidents of Niger, Mali and Senegal last week marched alongside more than a million French citizens to show solidarity with the victims of the Paris bloodshed, which began with a shooting attack on Charlie Hebdo’s Paris office.

But in an indication of the shifting mood, Macky Sall, president of one of Africa’s most stable democracies Senegal, said late on Thursday: “Freedom of the press should not, in our view, head in the direction of a totally pointless provocation.” Reuters