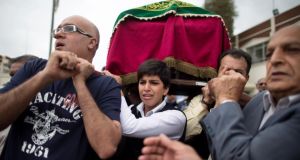 Relatives carry a coffin during a funeral procession for Selima Merali (41) and her daughter Nuriana Merali (15), who were killed in the attack by gunmen at the Westgate Shopping Centre. (Photograph: Uriel Sinai/Getty Images)

A former Irish Army ranger was part of a team of private security workers who helped to evacuate hundreds of people from Nairobi’s Westgate shopping mall while coming under fire from terrorists, The Irish Times has confirmed.

Amid varying reports since the weekend of expatriates engaging in gunfire with al-Shabaab hostage-takers, security sources have revealed the ex-Irish soldier’s role in rescuing dozens of shoppers as well as administering emergency medical treatment.

The man, who works with an international security company and does not wish to be named, had just left the shopping centre when the attack began.

Carpark evacuation
He armed himself and, along with a former British soldier and two other men, returned inside, first evacuating the underground carpark where more than 100 shoppers and staff had taken cover.

The four then returned to the mall and rescued dozens of other people from shopping areas. Along with the former SAS officer, the Irishman then tried to reach an upper floor of the mall where people known to them were trapped.

The pair exchanged fire with gunmen as they led dozens of other people who were hiding in restaurants and shops to safety. Outside the mall, the former Irish officer – who spent several years in the Army Ranger Wing – treated a number of people for gunshot wounds.

“He doesn’t want any attention. He was just doing his job,” said a local security source.

“They did what they had to do, and then tried to blend back into the crowds. They’re not looking for any publicity.”

It is understood members of the group are involved in providing protection and security to various foreign and domestic clients in Kenya.

Heroic actions
“It’s a credit to the Army Rangers that it provides the sort of skills to allow someone like him to save so many lives,” said another security source and close friend of the man. “It’s not wrong to say hundreds of lives were saved by his actions along with the other guys.”

The Army Ranger Wing was established in 1980 and has served in locations such as Somalia, Timor Leste and Chad, with a specialist role in dealing with hijackings, kidnapping and personal security.

Security analyst and retired army officer Dr Tom Clonan said former rangers bring an attractive skillset to private security companies internationally. “The general skills they have would be common to most military training but the ranger would do additional things like endurance training.” Of the former officer in Nairobi, he said: “This is a guy who was thinking on his feet, reacting automatically to what he heard.”

Dr Clonan added: “While private security contractors use ex-soldiers from all sorts of countries, a lot of the Irish guys going into that environment gravitate towards leadership roles.

“One of the principal things about the Irish is that they can mix in most social company. If you have served in the Irish Army you will have served in the Middle East, in Lebanon. Irish soldiers are generally less insular than others. They talk about what they have in common with the local population whereas the British and Americans tend to talk about differences.”