Analysis: there is concern right-wingers may form a new alliance with Islamists 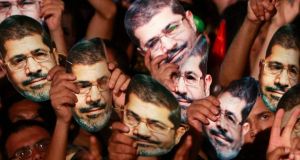 Members of the Muslim Brotherhood and supporters of deposed Egyptian president Mohamed Morsi hold up masks of him as they gather at the Rabaa Adawiya square, where they are camping, in Cairo. Photograph: Reuters/Mohamed Abd El Ghany

Egypt’s fundamentalist Muslim Brotherhood camp appears to have missed its chance to reach an accommodation with the liberal caretaker government backed by the military.

Leftist and nationalist revolutionaries who brought the masses into the country’s streets and squares to protest Brotherhood rule now reject its participation in the interim cabinet and the fundamentalist demands to define Egypt as an “Islamic state” governed by principles of Sharia law in the new constitution.

Hard-line attitude
The Brotherhood’s uncompromising demand for the reinstatement of deposed president Mohamed Morsi and mobilisation of tens of thousands of supporters in the Nasr City and Giza suburbs of Cairo have generated this equally hard-line attitude among the movement’s opponents.

A source told The Irish Times that the Brotherhood had been told by army chief Abdel-Fattah al-Sisi that it would soon have to send home its supporters, thousands of whom have travelled to the Cairo area to protest the ousting of Morsi.

German-trained engineer Mamdouh Habashi, a founding member of the Socialist Party, says: “For the first time in history a mass movement has turned against the Islamists, [making] our movement unique.”

He notes, however, that this movement comprises many factions that “brought their political forces together for only one task – getting the Brotherhood out of power”.

It was “formed by young people” who are “revolutionary and resourceful but at the same time inexperienced and naive”. They are supported by leftists, nationalists, liberals and elements of the regime of president Hosni Mubarak, ousted in 2011, who “oppose the Islamist project” involving transforming Egypt into an “Islamic state”.

Opportunist Islamists
To counter this, “opportunist Islamist” elements, including the ultra-orthodox Salafi Nour Party, moderate Abdel Moneim Aboul Fotouh and the Wasat Party “are trying to save what they can to keep Islamist influence in society”.

In Habashi’s view they could succeed because right- wingers – the army, the remnants of the Mubarak regime and liberal conservatives – in the coalition could “form a new political alliance with the Islamists” to betray the June 30th revolutionary drive that deposed Morsi. The aim of this grouping would be to continue the line adopted by the Mubarak regime by establishing “a more sustainable form of government”.

The US, Habashi says, is backing this. “We can see this in appeals to gatherings” urg- ing the rival camps to recognise “we are all Egyptians”.

“Our slogan is, yes, we are all Egyptians, but we have contradictory interests . . . These appeals benefit the Islamist project and damage the mass call for a secular ‘civil’ state . . . The only way out of this dilemma is to form a powerful bloc of leftists and nationalists which will attract huge numbers of young peo- ple. We are working in this direction but it is not easy.”