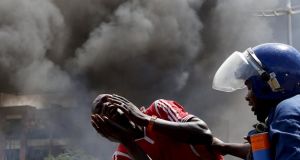 A detained protester cries in front of a burning barricade during a protest against President Pierre Nkurunziza’s decision to run for a third term in Bujumbura, Burundi. Photograph: Goran Tomasevic/Reuters 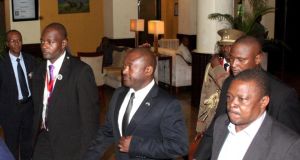 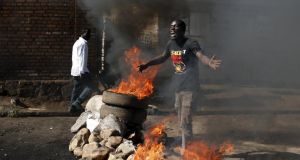 An anti-government protester stands in front of a burning barricade in Bujumbura, Burundi. Photograph: Goran Tomasevic/Reuters 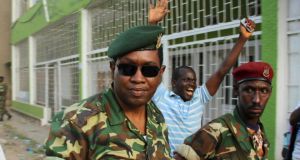 Rival military groups have been battling for control of the Burundi capital, a day after a former intelligence chief staged an attempted coup against president Pierre Nkurunziza.

Heavy gunfire rang out from the direction of the ruling CNDD-FDD party headquarters in Bujumbura, which witnesses said was being guarded by police. It was difficult to determine who was in control of the capital, with periods of relative calm broken by bouts of gunfire in the evening. Five soldiers were reportedly killed.

Burundi has been a tinderbox since Maj Gen Godefroid Niyombare, a former intelligence chief fired three months ago, announced Mr Nkurunziza had been ousted after weeks of deadly civil unrest triggered by the president‘s attempt to stand for a third term.

Early on Thursday, the army chief of staff, Gen Prime Niyongabo, announced on state radio he did not support the attempted coup – a signal not all the military forces were aligned. Gen Niyongabo said he had negotiated with those supporting the coup but if they “did not understand talking, we will make them understand by force”.

The rival factions struggled throughout the day for control of public and private radio stations. In the afternoon, Mr Nkurunziza made an announcement on radio, from an unknown place: “I condemn that group of coup plotters. I thank soldiers who are putting things in order, and I forgive any soldier who decides to surrender,” he was reported as saying.

Heavy fighting flared around the state broadcasting headquarters, forcing radio transmissions to halt briefly. They resumed after the shooting eased to announce state radio was still in the hands of forces loyal to the president. The state broadcaster is seen as a strategic asset for both sides.

Earlier, the African Public Radio station, shut down during weeks of protests and reopened after the coup attempt, was set alight and prevented from broadcasting. Radio Bonesha, another private station, was also attacked by people who hurled grenades and shot at the building. Burundi’s international airport was shut then reportedly reopened and taken over by party loyalists.

The violence leaves the country facing its biggest crisis since the end of a 12-year civil war in 2006. Hundreds of thousands died and the subsequent peace accord ensured the future army would be 50/50 minority Tutsis and majority Hutus.

Mr Nkurunziza, a former rebel leader from the Hutu majority and born-again Christian, believes he ascended to the presidency in 2005 with divine backing.

More than 22 people have been killed and scores wounded since late April, when Burundi‘s ruling CNDD-FDD party nominated Mr Nkurunziza to stand for re-election in polls on June 26th. More than 50,000 Burundians have fled to Rwanda and other countries in recent weeks, with the UN preparing for thousands more. – (Guardian service)