Egypt’s reliance on US military shipments has been overstated 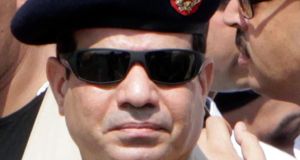 Cairo has criticised the Obama administration’s decision to suspend military aid to Egypt in response to the army’s crackdown on the Muslim Brotherhood and its exclusion from the transition to multiparty democratic governance.

Foreign ministry spokesman Badr Abdel Atty said Egypt would “not surrender to American pressure” and argued that the country “is continuing on its path towards democracy”.

Egypt’s lack of concern was demonstrated when, coinciding with the expected announcement from Washington, caretaker president Adly Mansour ceded key presidential powers to minister of defence and army chief Abdel Fattah el-Sisi, the prime mover of the crackdown.

Mr Mansour has delegated the powers to mobilise the public, decide on deployment of the military and manage crises and catastrophes.

National emergency
These, combined with the state of national emergency, considerably boost the general’s power at a time when Egyptian liberals and western governments have expressed the view that the country could revert to military rule.

While Saudi Arabia has pledged to make up for Egypt’s losses, the Egyptian army is unlikely to greatly miss US deliveries.

In a widely-quoted article published last August, Julia Simon of the US National Public Radio pointed out that little of the $1.3 billion in annual US military aid gets to Egypt in the form of cash grants. The money is deposited in the Federal Reserve Bank of New York and then goes to the US treasury which doles it out to contractors that make the equipment shipped to Egypt.

Since the 1980s Washington has supplied more than 1,000 tanks valued at $3.9 billion to Egypt but 200 of those tanks remain crated, Robert Springborg, a military source at the US Naval Post Graduate School is reported to have said. George Washington University expert Shana Marshall quipped: “There’s no conceivable scenario in which they’d need all those tanks short of an alien invasion.”

Although US Abrams tanks and armoured troop carriers have been parked around Cairo’s Tahrir Square to prevent Muslim Brotherhood supporters from invading the territory of the anti-Brotherhood crowd, tanks cannot be used to counter terrorism or secure the country’s porous borders, the major threats Egypt faces. Egypt has also received 221 F-16 fighter planes, far more than it requires.

Nevertheless, Cairo continues to request and receive these war machines. The US wants to keep them in the pipeline because its defence contractors have benefited by roughly $40 billion over the past 30 years. The contractors include Lockheed Martin, Northrop Grumman, General Dynamics, Boeing, Sikorsky and General Electric.

These firms will not be overly concerned by the suspension as aid for this year has been either allocated or spent. The suspension targets deliveries of equipment to Egypt rather than orders that are in the process of being fulfilled in accordance with long-term contracts with the US treasury.