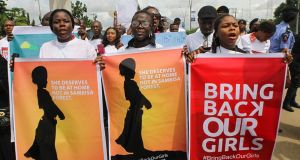 Nigerians protest over the government’s failure to rescue the abducted Chibok school girls in Port Harcourt, Nigeria. The Islamist group Boko Haram has claimed responsibility for abducting over 200 girls from their school in Chibok, Borno state, over two weeks ago. Photograph: EPA/STR

As word spread like wildfire on Twitter and Facebook that Nigerian militants were preparing to auction off more than 200 kidnapped schoolgirls in the name of Islam, a very different internet network started quietly buzzing too.

“Such news is spread to taint the image of the Mujahedeen, ” wrote one dubious poster on a web forum used by Islamic militants whose administrator uses a picture of Osama bin Laden. “I have brothers from Africa who are in this group,” attested another, insisting that they were like “the Quran walking the earth”.

Boko Haram, the cultlike Nigerian group that carried out the kidnappings, was rejected long ago by mainstream Muslim scholars and Islamist parties around the world for its seemingly senseless cruelty and capricious violence against civilians. But this week its stunning abduction appeared too much even for fellow militants normally eager to condone terrorist acts against the West and its allies.

“There is news that they attacked a girls’ school!” another astonished poster wrote on the same jihadi forum, suggesting delicately that Boko Haram may perhaps be killing too many noncombatants instead of armed enemies. He prayed that God would “hold them steady to the path” of Islam.

Dismay
The dismay of fellow jihadists at the innocent targets of Boko Haram’s violence is a reflection of the increasingly far-flung and ideologically disparate networks of Islamist militancy, which now include the remnants of bin Laden’s puritanical camps, Algerian cigarette smugglers and a brutal Somalian offshoot.

“The violence most of the African rebel groups practice makes al-Qaeda look like a bunch of schoolgirls,” said Bronwyn Bruton, an Africa scholar at the Atlantic Council in Washington. “And al-Qaeda at this point is a brand – and pretty much only a brand – so you have to ask yourself how they are going to deal with the people who are doing things so hideous even the leaders of al-Qaeda are unwilling to condone them.”

Boko Haram is in many ways an awkward ally for any of them. Its violence is broader and more casual than that of al-Qaeda or other jihadist groups. Indeed, its reputation for the mass murder of innocent civilians is strikingly inconsistent with a current push by al-Qaeda’s leaders to avoid such deaths for fear of alienating potential supporters. That was the subject of the dispute that led to al-Qaeda’s recent break with its former affiliate, the Islamic State of Iraq and the Levant.

What’s more, Boko Haram’s recruits and targets have always been purely local, not international. And the group is centred on a messianic leader who claims to speak with God and demands that its adherents surrender all their possessions to the group, resembling a cult, like Uganda’s Lord’s Resistance Army, more than it does an orthodox Islamist movement.

Disagreements
But Boko Haram and al-Qaeda’s affiliates have both overlooked those differences to cultivate an alliance of convenience, papering over disagreements in tactics and values while emphasising shared principles. They have reaped the propaganda value of association with each other’s deadly exploits, and in limited instances perhaps even trained or collaborated together.

Their partnership demonstrates a centripetal force pulling together even disparate insurgencies against common foes. And, scholars say, Boko Haram now also represents a growing challenge to al-Qaeda as it seeks to cultivate more such affiliates among loosely Muslim or Islamist insurgencies across Africa, almost all of them far more brutally violent than even the acolytes of bin Laden can accept.

First formed in the early 2000s, Boko Haram grew out of an ultraconservative Islamic movement of well-educated students. The group grew overtly political only later, under the leadership of its charismatic founder, Mohamed Yusuf. Its nickname in the African language of Hausa, Boko Haram, is usually roughly translated to mean that “deceptive” or “western” education is “forbidden”. But scholars say that the phrase had a kind of double meaning that was at once religious and social in the context of northern Nigeria.

Western education was available only to a very small elite who typically travelled to British universities and then returned to rule from the capital over the impoverished north, and ending the tyranny of that elite was the main objective of Yusuf’s movement.

Yusuf and Boko Haram tapped into growing anger among northern Nigerians at their poverty and lack of opportunity as well as the humiliating abuses of the government’s security forces, said Paul Lubeck, a professor at the University of California, Santa Cruz, who studies the group. At first, even as Boko Haram turned to violent opposition to the government, the group avoided civilian casualties.

Attacked mosque
“They generated a lot of support because they didn’t kill many innocent people,” Lubeck said. That changed in July, 2009, after about 70 Boko Haram fighters armed with guns and hand grenades attacked a mosque and police station in the town of Bauchi. About 55 people were killed in the battle, according to an American diplomatic cable about the episodes that was later released by WikiLeaks.

The next day, Nigerian security forces retaliated with a brutal crackdown that killed more than 700 people, including many innocent bystanders. Security officers paraded Yusuf before television cameras and then summarily executed him in front of a crowd outside a police station – an episode that the group’s adherents often recall with horror as the decisive moment in their turn to wider violence.

Three weeks later, al-Qaeda in the Islamic Maghreb – originally an Algerian Islamist insurgency that found advantages in publicly linking itself to al-Qaeda’s infamy – issued a public statement reaching out to Boko Haram in a public expression of brotherly sympathy.

Boko Haram’s remaining members scattered to other African countries, where many scholars argue they would have received a welcome from al-Qaeda affiliates. The Algerian government has said that some of Boko Haram’s fugitive members received training in Algerian camps from al-Qaeda in the Islamic Maghreb. Boko Haram itself eventually circulated video footage that purported to show some of its members training in Somalia with fighters from the al-Qaeda affiliate there, al-Shabab.

Evidence
Lubeck, of UC Santa Cruz, said other fragments of evidence have surfaced as well, such as cellphones belonging to Boko Haram fighters that were seized in a raid by the government of Niger. But whether with help from al-Qaeda or other sponsors, Boko Haram soon returned to Nigeria far more sophisticated and better equipped. In late 2010, under the new leadership of Abubaker Shekau, formerly the group’s second in command, Boko Haram begun staging more lethal attacks. Instead of throwing hand grenades or gas bombs, Boko Haram’s fighters began to conduct a campaign of assassinations by gunfire from motorcycles. (The government ultimately banned motorcycles from the areas where they were active.) They also drove pickup trucks mounted with artillery. The vehicles, Nigerian officials say, were traded out of Libya after the fall of Muammar Gadafy.

And Boko Haram became increasingly indiscriminate. Shekau, the leader who claimed to be in communication with God, said that the sole purpose of its violence was to demonstrate the incapacity of the Nigerian state. “Shekau initiated this brutal killing of innocent people,” Lubeck said.

Bruton of the Atlantic Council said: “The guy is unhinged.” Shekau has also continued to express his admiration for al-Qaeda and its ideology. But it remained “an overwhelmingly locally-focused group, recruiting locally,” Lubeck said, adding: “To say that it was part of the international Islamist conspiracy distorts things. There is no systematic or strategic connection.”

On Wednesday, as western governments prepared to send help to find the kidnapped girls, there were no reports of any new expressions of support for Boko Haram from al-Qaeda.