Merkel under pressure in wake of Christmas market attack 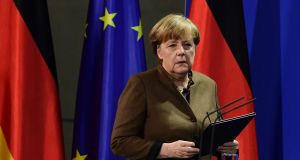 Guilty relief crept across Berlin’s Breitscheidplatz on Friday with the news that the chief suspect for Monday evening’s tragedy was gone.

That Anis Amri died without answering any questions about the attack is a mixed blessing for Berliners, German police and chancellor Angela Merkel. “I feel relieved but also disappointed that we’ll never have full clarity about his motivations,” said Helena (22) at the market, open again since Thursday.

Dr Merkel’s concession that recent days had thrown up a “series of questions” was perhaps Germany’s understatement of the year. Berlin’s state government has to explain why a notorious city mosque – where Amri was possibly radicalised and where he was filmed hours after the attack – is still open despite long-running plans to close it.

German investigators have to explain how much of a headstart Berlin blunders gave the Tunisian, allowing him leave Germany for France and then Italy, where he was only caught by chance. And German politicians have to explain why existing laws allowed an Islamic State sympathiser with a criminal record, who volunteered to serve as a suicide bomber, to be released following a deportation order – because he had no passport.

This is a complex situation, of many moving parts, parties and competences. But Dr Merkel knows that all of this has all landed in her lap. No serious politician in Germany blames her directly for Monday’s deaths but if her asylum policy has increased the Islamist threat and made people feel less secure, what are the consequences?

Following this summer’s Bavarian attacks, a resolute Merkel stood by her 2015 refugee policy but admitted Germany was now “at war with Islamist terrorism”. People who were willing then to give her the benefit of the doubt are restless now. How will Germany protect its people and take the war to Isis?

Merkel will try, as always, to reduce the challenge to a series of small, practical steps, such as tightening asylum and deportation laws. Everyone agrees it is a tragic farce that 12 people died, 48 were injured and German national security was compromised because Tunisia dragged its feet in issuing a passport for Amir, meaning he was released from custody instead of being held until his deportation.

Germany’s embattled chancellor needs more than just a to-do list now that the refugee crisis of 2015 that morphed into 2016’s integration debate is, as election year 2017 looms, a fully fledged security debate.

Before getting lost in legal detail or slipping into election mode, she must agree a grand bargain with other mainstream parties on two priorities. First: clear reciprocal roadblocks in Germany’s Byzantine federal system, particularly on asylum law, that contributed to this week’s tragedy.

Second: agree rules of engagement with other mainstream leaders to shield Germany’s many new arrivals from becoming a security scapegoat in the election because of the threat posed by a few.

For Merkel to counter that, and still be chancellor in a year’s time, she If not, the “take back control” virus from elsewhere will take hold here and the centre will not hold.

Back on Breitscheidplatz in western Berlin, locals had more practical concerns on Friday. “Is it a good idea,” wondered Eckhardt Keding (65) “to have a Christmas market on a glorified traffic island between two of the city’s busiest roads?”