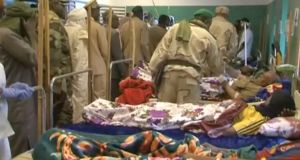 Military officials visit injured soldiers at a hospital after a suicide car bomb attack on a military camp in Gao, Mali, January 18th, 2017 in this still image taken from video. Screengrab: Reuters TV

At least 60 people have been killed after a suicide bomber in an explosives-laden vehicle attacked a camp in northern Mali.

A total of 115 soldiers and former fighters, who are now trying to stabilise the region, were also wounded in the attack.

While there was no immediate claim of responsibility, suspicion quickly fell on the Islamic extremist groups operating in the area which oppose the 2015 peace agreement that brought the parties together.

The attack marks a significant setback for efforts to achieve peace in the region. The UN Security Council was expected to discuss Mali on Wednesday.

The morning blast hit the Joint Operational Mechanism base in the city of Gao, home to Malian soldiers and hundreds of former fighters who had signed the peace agreement with the government.

A Malian military official, Col Mohamed Ould, put the death toll at more than 50, with more than 100 others wounded.

Dr Sadou Maiga, at Gao’s hospital, said all other hospital activities have ceased, with dozens of wounded victims arriving.

“Some have died from their wounds, and others are in a very grave state,” he said. “At this point, it’s not the toll of dead and injured that interests me, it’s saving who I can.”

Witnesses said the car bearing explosives breached the camp at about 9am, just as hundreds of fighters were gathering for a meeting.

The attack underscores the enormous challenges that remain in northern Mali four years after the French military led an intervention to drive the jihadists from power in major towns across the area.

The peace agreement has proved difficult to implement and unpopular with the forces wreaking havoc in the region.

The former fighters who signed the 2015 peace deal include ethnic Tuareg secular rebels who once fought the Malian military. Now they are supposed to be forming joint patrols in the area, though the programme has yet to begin.

Mali has become the world’s deadliest UN peacekeeping mission. Some 29 UN peacekeepers were killed last year in attacks blamed on jihadist armed groups, according to a Human Rights Watch report released on Wednesday.

The report detailed how extremists are extending their reach further into central Mali.

The report also denounced rising levels of “banditry”, a phenomenon victims say is fuelled by the slow implementation of the 2015 peace accord.

Malian security minister Salif Traore declined to respond to the report’s specifics but said he is well aware of security challenges throughout the region.