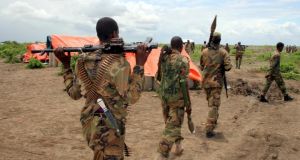 Al-Shabaab militants stormed an African Union base in southern Somalia on Tuesday, where they say they killed 50 peacekeepers, in what the AU mission called a “heinous” attack.

The al-Qaeda-aligned militants said one of their fighters rammed a car bomb into the base, in Janale, about 90 km south of the capital, Mogadishu, and then gunmen poured inside.

The African Union peacekeeping mission, known as Amisom, did not immediately release casualty figures for the attack, which came roughly a year after al-Shabaab leader Ahmed Abdi Godane was killed in a US air strike.

Al-Shabaab often exaggerates the success of its attacks, and officials played down losses. But Somalia-focused diplomatic sources said the death toll was expected to be “very large”.

Amisom said in a statement the militants had forced their way into the camp, which is run by the Ugandan contingent of Amisom, and “engaged our soldiers in a gun-battle.”

“Although our troops undertook a tactical withdrawal following the initial vehicle-borne explosive attack, they have since consolidated and regained full control of the base,” it said.

Al-Shabaab frequently targets AU bases and convoys, as well as Somali officials, in its bid to topple the Western-backed government. Somalia is trying to rebuild after two decades of conflict and chaos.

Captain Bilow Idow, a Somali military officer based in a town near Janale, said the base had been effectively cut off as the militants had destroyed a nearby bridge.

“No reinforcement can reach there,” Idow said. “There is much death and damage.”

“After morning prayers we heard a big explosion followed by heavy gunfire in the Amisom base,” Janale resident Ahmed Olow told Reuters.

Al-Shabaab has also carried out attacks against neighbouring countries such as Kenya and Uganda to retaliate for troops being sent to Somalia as part of the AU peacekeeping force.