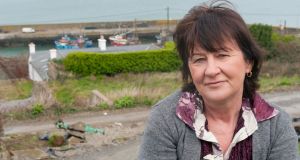 The widow of the skipper of the ill-fated trawler Tit Bonhomme yesterday defended the competence of her husband and his crew after a Marine Casualty Investigation Board identified crew fatigue as the main cause of its sinking with the loss of five lives.

Caitlin Ui hAodha said she accepted the need for the report into the sinking of the trawler at the mouth of Glandore harbour in west Cork on January 15th last year, but stressed that she did not agree with certain aspects of it.

A sixth member of the crew, Wael Mohammed’s brother Abdelbaky Mohamed (44), a father of three, survived the sinking, which happened as the 21m Tit Bonhomme was returning home after cutting short a fishing trip following problems with a leaking oil pipe.

Speaking yesterday, Ms Ui hAodha said she was reluctant to get into a detailed discussion of the 60-page report but she did take issue with its finding that crew fatigue was the principal factor leading to the trawler hitting Adam’s Island at the mouth of Glandore harbour.

Fishing grounds
“I couldn’t accept fatigue as the sole cause of the accident in that the trip was very, very short – they left port on Friday afternoon and left the fishing grounds to return home at around 2am on Sunday morning whereas normally they would have been gone for five or six days.

“But given they started for home on Sunday morning, they were only fishing for one day, Saturday, and a bit of Friday evening. Saturday was a fine day so they’d have had time to rest because they do six-hour tows so it was probably one of their shortest, least fatiguing trips.”

Ms Ui hAodha said the picture of her husband, a father of five, and his crew which emerges from the report did not do justice to the experienced and competent fishermen who were highly respected within the fishing industry along the south coast and beyond.

“Michael had spent over 30 years as a fisherman – he was an experienced and competent fisherman but he was also a competent boatman and a competent seaman who had been a volunteer with the Helvick lifeboat for a number of years and he knew the sea well.

“I would also have great confidence in the crew of the Tit Bonhomme . You must remember that when these people worked together, they had great trust in each other. Anyone who worked on board that boat was a capable and able seaman.”

The report noted that two of the Egyptians, Said Ali Eldin and Attaia Shaban, along with Kevin Kershaw who was on his first trip, were not recorded as possessing the required safety training but Ms Ui hAodha said the crew were familiar with safety procedures.

The families
“Unfortunately something changed on that trip from all the other trips they undertook and they were lost but we will probably never really know what happened,” said Ms Ui hAodha, who paid tribute to both the voluntary and statutory agencies for their support to the families.

Ms Ui hAodha raised issues with the Department of Transport in March last year regarding the response times from the Irish Coast Guard helicopters at Shannon and Waterford to the sinking but she stressed these questions were not intended as criticisms of the service.

“Those questions were questions we felt as a family that we had to ask – they were not intended as a criticism because I have complete admiration for those people who have a difficult job to do in very tough situations dealing with the most awful tragedies.”

3:30 Cost of Covid-19 to the exchequer is already 'potentially higher' than €8bn

1 Coronavirus: Surge of cases hits nursing homes as clusters jump to 38
2 Ireland has strategy to ‘break the chains’ of coronavirus - WHO’s Mike Ryan
3 We need to cancel the Leaving Cert and give students predicted grades
4 Coronavirus: Situation in Ireland ‘misrepresented’ because of limited testing
5 Coronavirus: Residents of Wuhan told to stay inside and be vigilant
Real news has value SUBSCRIBE