What’s on for the weekend

Sailing, hurling and the Carlow Arts Festival among the highlights of a sunny weekend 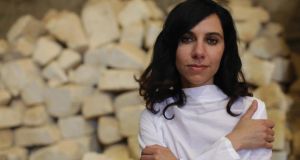 PJ Harvey is among those participating in the Borris Festival of Writing and Ideas.

More than 500 competitors are expected to take part in An Ras Mor in Cork Harbour tomorrow as part of this year’s extended Ocean to City Maritime Festival in Cork.

The race will see competitors in currachs and a variety of other traditional craft race the 15 nautical miles from Crosshaven starting at midday out to the mouth of Cork Harbour and back up to the city.

The Éigse Carlow Arts Festival was opens tonight by musician and actress Bronagh Gallagher. The Party gets underway in earnest tomorrow with the Taste of Carlow food market, an outdoor gig with Sharon Shannon and her big band and a fireworks display to mark the 800th birthday of Carlow Castle. Among those participating in the nearby Borris Festival of Writing and Ideas will be Isabel Fonseca, Selina Guinness, Paolo Tullio, Dorothy Cross, Fintan O’Toole, Martin Amis and PJ Harvey.

A Táin re-enactment will take place on the Market Square in Dundalk tomorrow afternoon at 2.30pm as part of the three day celebration of the Táin Bó Cuailgne, (Cattle Raid of Cooley) The main events centre around Ardee, Dundalk and Carlingford across three days on 7th to 9th June.

The Offaly village of Daingean will have a Gathering event to celebrate its medieval heritage this weekend. Tomorrow will have active sports and a barbecue, while the highlight on Sunday will be a battle re-enactment between the O’Connor family, whose base was in Daingean, and local foes.

The Love/Illustrate exhibition featuring emerging children’s books’ writers and illustrators takes place over the weekend at Filmbase in Temple Bar. The exhibition will feature works in a variety of media, as well as sample books for visitors to read. It is aimed at families with young children.