Waterford deaths: southeast corner one of the most exposed parts of coast 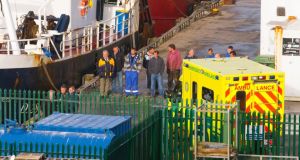 The southeast corner of Ireland is known to be one of the most challenging parts of the coastline and Tramore Bay, which faces southwest, offers no shelter from prevailing winds.

Local Sinn Féin Cllr Pat Fitzgerald knew the men well and last night extended his sympathies to their families. He added that such tragedies were becoming far too commonplace among the fishing communities on the southeast coast and something needed to be done to prevent any repeat.

“Tragedies like this are happening far too often. Fishermen are finding it harder and harder to make a living. Their position is being made untenable and they are being forced to go out and risk their lives to try and support themselves and their families, and something has to be done.”

Yesterday’s tragedy is but one in a long series of such tragedies to hit the Dunmore East and Passage East areas of Co Waterford. Last January, Dunmore East fisherman Johnny Flynn (43) was lost at sea, while in September 2009 Paddy Mason (59) from Passage East died while fishing in the area.

‘Pere Charles’
Two years earlier in January 2007, the Pere Charles sank off Dummore East with the loss of all five crew: skipper Tom Hennessy, his uncle Pat Hennessy, both from Kerry, Patrick Cody from Wexford, Billy O’Connor from Dunmore East, and Andrea Dyrin from Ukraine.

Individual commercial fishing crew and anglers have also lost their lives here. Even in summer weather conditions, small-boat potting for lobster and crab is a hazardous occupation, with craft and crew being at their most vulnerable when hauling gear.

Investigation
Details of the loss of the three men in Tramore Bay yesterday were still emerging last night, and a full investigation into the circumstances will be conducted by the Marine Casualty Investigation Board (MCIB).

A significant proportion of MCIB inquiries are into incidents involving shellfish craft. A series of recommendations on small-boat safety has been forwarded by the board over the years to the relevant agencies – with the Department of Transport currently holding overall responsibility.

Among such recommendations have been measures to ensure that lifejackets are worn, that safety gear such as emergency position-indicating radio beacons (Epirbs) are installed, and that boats are approved by marine surveyors after modifications.

Unavoidable
The experience of one Co Waterford fisherman who died on September 17th, 2009, indicates that fatalities are sometimes unavoidable.

Paddy Mason was dragged overboard off Dunmore East when his boot got caught in a loop of rope while shooting a second string of crab pots.

Two Co Mayo crab boat crew – John O’Donnell and Nathan Flannery – were more fortunate, when they survived a capsize off Porturlin in October 2010. Their vessel was lying beam to the breeze in a large swell when it began to list to starboard.

A large wave broke over the vessel, stacked pots and boxes shifted, the vessel listed further, and both men were thrown into the water.

The pair located their canister liferaft but it failed to inflate automatically.

They were forced to cut the straps of the canister with a key and were picked up by the rescue services some hours later.