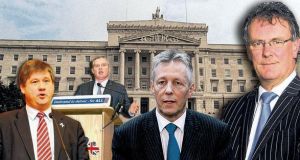 Split: Basil McCrea (left) and John McCallister walked out of the UUP after Mike Nesbitt (right) agreed with the DUP leader Peter Robinson (second right) to stand a candidate in next week's Westminster byelection. montage: itpm

A new breakaway group has put the once-strong Ulster Unionist Party under pressure. What is its future?

‘If you don’t know where you are going, any road will take you there.” That’s a down-home disparaging line from the South Down Assembly member John McCallister, who, along with his Lagan Valley colleague Basil McCrea, has embarked on another adventure in splintered unionist politics. He’s referring to the former UTV news anchorman Mike Nesbitt, leader of the Ulster Unionist Party.

McCallister and McCrea walked out of the UUP in the middle of February after Nesbitt, with the DUP leader Peter Robinson, agreed to stand a unionist unity candidate, Nigel Lutton, in next week’s Mid-Ulster Westminster byelection.

This, the “two Macs” argued, signalled a “retreat into sectarian trenches” and confirmed “that there is little to separate the current unionist parties: no matters of principle, no overarching values, no policy differences upon which to fight an election”.

So on Tuesday night 41-year-old McCallister, a farmer from Rathfriland, and 53-year-old McCrea, who was born in Ramelton, Co Donegal, took the decision to start a new pro-union party.

It will not have the word unionist in its name or the Union flag in its logo. The name of the party will come after issues have been ironed out with the Electoral Commission. Its formal launch is likely to happen in April.

It’s a courageous move, but, as devotees of Yes Minister will know, that’s a term sometimes used as a euphemistic political putdown. But, brave or barmy, it’s a decision that puts great pressure on Nesbitt.

What happens in the coming months could determine whether the Ulster Unionist Party, which dominated politics for so long in Northern Ireland under powerful names such as Edward Carson, James Craig and David Trimble, will have a future of reasonable strength and relevance.

As Martin McGuinness and, more particularly, Gerry Adams pursue their Border poll project, you could imagine the pair of them rubbing their hands as unionists appear to fall for the old British divide-and-conquer routine, but in this case authored by themselves.

Nesbitt, in his leadership, has concentrated on bringing some discipline to a notoriously individualistic and unbiddable party.

He wants to strengthen its organisation so that it can establish firm foundations. His emphasis appears to be on purifying the party rather than on keeping faith with traditional broad-church Ulster Unionism.

At Stormont now there are pro-union Assembly members from the DUP, the UUP, the UK Independence Party (Ukip), the Traditional Unionist Voice and whatever McCallister and McCrea call their new party when it is formally established later this spring – possibly around the 15th anniversary of the Belfast Agreement, which they fully support.

And that is not to mention the independent unionist MLA for East Derry, David McClarty, nor the Conservatives, who also believe they have a pro-union political future in the North, although they have no Assembly seats.

This latest round of unionist subdivision has been happening over the past two years and follows a previous round when the North Down MP Lady Sylvia Hermon quit the UUP, in 2010, because of the link-up with David Cameron’s Tories – another adventure that failed.

In 2011 McClarty split from the UUP, then led by Tom Elliott. A sitting MLA, he was deselected from standing in East Derry ahead of the 2011 Assembly elections. He stood as an independent. He won. The UUP candidate lost.

The trouble for Nesbitt is that this could be incremental. By the time he has a well-ordered party it could be a sinking ship.

It’s unfair to blame all this on Nesbitt; he joined the UUP only three years ago and has been leader for just 11 months. But there could be an Ulster Unionist implosion under his watch.

He was viewed as the great liberal unionist hope, in the same camp as McCallister and McCrea. In his first and only annual conference so far, last September, Nesbitt placed the UUP as a pluralist, anti-sectarian, pro-union party that wants to draw support from all sections of society.

But his handling of the flags issue has not been sure-footed; his complaints about the union being chipped away because the Union flag wouldn’t fly every day over Belfast City Hall cast him in a harder traditional unionist light.

Moreover, he hasn’t been lucky. His perceived lack of a central political philosophy – hard work was his “big idea”, he said – infuriated the likes of McCallister and McCrea.

Nesbitt is also viewed by several inside and outside his party as strategically inexperienced and limited.

While he is urbane and articulate and has a high profile from his TV days, there are mutterings that he is being outmanoeuvred by Robinson and is in thrall to him – cruel portrayals of him as the First Minister’s poodle by the Irish News cartoonist Ian Knox emphasise that point.

As the UUP vote has fallen, the fortunes of the DUP have risen. Robinson can watch this from an Olympian height, calculating that, however it all plays out, it will be mainly to his party’s advantage.

But Robinson also will be conscious that McCallister and McCrea could appeal to a certain section of unionism that he wants to attract and to some Catholic voters who, in accordance with the recent census, see themselves as Northern Irish or – satisfied with the Belfast Agreement recognising their Irishness – are happy to hold with the union.

They could also be the subject of discussion in the corridors of the Alliance annual party conference today. A number of moderate middle-class unionists – some possible Alliance supporters – while appalled by the violence were nonetheless unsettled by the flags decision.

McCallister and McCrea now provide them with a pro-union voting alternative.

There are also many who would love to see unionist unity to confront a feared emerging Sinn Féin monolith.

But he two Macs insist that there is no threat to the union and that a one-size-fits-all unionism just won’t work.

McCallister, in his Co Down country way, brings this latest round of internal Ulster Unionist fragmentation back to Nesbitt. A party must have a set of policies, a vision, he says. It’s just basic politics: “If you don’t know what your message is, how can you sell it on the doorsteps?”

He and McCrea, with a spring pep in their step, say the new party will have plenty of vision and policies when it is formally launched, and that it will grow.

Say hello to the two Macs McCallister and McCrea

“The two Macs” are an engaging pair: affable, laid back, confident and unconstrained by the past.

McCrea is the more ambitious and self-promoting of the two, and McCallister seems happy to let him be leader.

They say they will act as an opposition at Stormont.

Their “guiding principles” are:

a pro-union party representing all sections of the community;

a party committed to the values of the Belfast Agreement;

a party “where religious persuasion should not define political beliefs and where matters of conscience are best left to the individual”;

and, in a principle that incorporates their view of the flags issue and the leader they have abandoned, a party that “does not need to wrap itself in a flag to provide leadership to the people of Northern Ireland”.

NDRC confirms tender loss as it gains €3.1m from LearnUpon exit 08:30
Exiting Level 5: What will be allowed from December 1st? 08:26
Edinson Cavani could face ban as FA investigate Instagram post 08:22
Coronavirus: Fears of post-Thanksgiving surge in US 08:18
Arcadia on the brink of becoming biggest retail casualty of pandemic 08:15